The Art Of Rozz Williams: From Christian Death To Death - Announcement 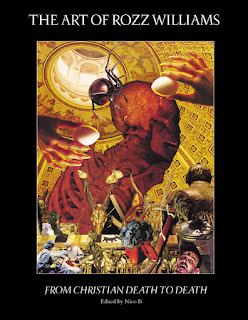 The darkness of life and art, the world of Rozz Williams.

Rozz Williams as featured in the movie PIG (as directed by Nico B) was the founder of CHRISTIAN DEATH an influential band in the genres Death Rock and Goth to this day. Rozz was also an artist, poet unknown to many who sadly past away after the making of PIG. Nico B published a book on him in 1999 which is now long out-of-print. To bring back to life THE ART OF ROZZ WILLIAMS- FROM CHRISTIAN DEATH TO DEATH as a hardcover book, support the INDIEGOGO campaign to get this book reprinted.

The Art Of Rozz Williams- From Christian Death To Death
New Revised Hardcover Book, Edited by Nico B, Sign up now and get your copy!
https://www.indiegogo.com/projects/the-art-of-rozz-williams/coming_soon
Posted by Celluloid Terror (Seth Poulin) at 1:25 PM