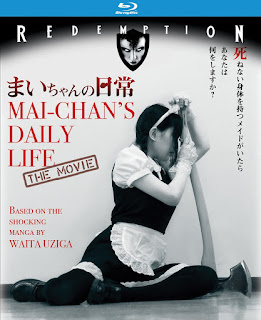 The Film
Miyako is a pretty woman looking for a new job when she comes across a listing for a live-in maid position that pays well. She's hired after inquiring for the job and is quickly fitted for her skimpy, sexy outfit and quickly meets Mai-Chan, another maid working for their "master". Soon after Miyako finds that Mai-Chan is being used as a human play thing for all of their masters twisted fantasies because she regenerates fully from any injuries she sustains. When Miyako is given the opportunity to act out some of her own desires she quickly finds out how sick and twisted she really is.

MAI-CHAN'S DAILY LIFE is based on a Japanese manga that I'm totally unfamiliar with but if the film adaptation is faithful to the manga than it's quite the explicit book. This film is for fans of excess who like their sex and gore. While the film takes place in limited locations that look like sets designed for a stage play, there is definitely a "more is more" attitude when it comes to graphic violence and nudity, particularly the gore. Eyeballs, guts, full dismemberment, it's all here on full bloody display. It's the sexual tension drives the film from point A to point B which leads to the violent acts. The tension between Miyako and Mai-Chan is also purposely inflicted on the viewer as the camera constantly gives up-skirt views of the girls' panties and follows them in an almost seductive manner. I almost felt voyeuristic watching this film, which I feel was intended by director Sato Sade. Sade revels in sexualizing everything from scrubbing the floors and dusting to the use of a chainsaw and actual sex itself.

There are moments in MAI-CHAN'S DAILY LIFE that even air on the surreal side. The film has a stylish look despite some sets looking a bit chintzy. The sets are interestingly even if sparsely dressed, the costumes are nicely designed and the effects are very well done. There are some scenes that you can tell were shot with different cameras as the quality shifts but overall I think MAI-CHAN'S DAILY LIFE does quite a good job at bringing a highly sexualized, gore fest manga to life in the form of an exploitation film while keeping it in a world that straddles the line of fantasy and reality.

The Audio & Video
Redemption Films has brought MAI-CHAN to Blu-ray with a very nice HD presentation. The 1.78:1 anamorphic widescreen transfer largely looks very crisp and sharp. There are moments where it's apparent that somewhat lower quality equipment was used in the production of the film and the image quality in those moments drops just a bit but never to the point of looking bad. Colors are vibrant and detail is strong in the lacy maid uniforms to the wood floors and metal furniture. Black levels are deep and inky and really round out a quality transfer. The audio is in the film's native Japanese with optional English subtitles. The HD audio is clear and free of distractions like popping, crackling or buzzing. There's no background noise either and the subtitles are translated well and timed perfectly with a white colored font.

The Bottom Line
This is 63 minutes of insanity that gore hounds need to take note of.