Los Angeles, CA (October 2016) For immediate release. Synopsis: 80 years ago, the diabolical Dr. Victor Wolffenstein wanted nothing more than to be immortal. His tireless quest led him to create a vaccine that did just that, but also infected his body with a flesh-rotting form of necrosis. As the Doctor’s limbs literally fell apart, he tried to replace them by using the crudely removed arms and legs of the local villagers who, in order to stop Wolffenstein’s reign of terror, captured him and buried him alive for his crimes.
In present day, five teenagers plan to attend an out of town rave that goes awry, and end up stranded in the village, when the evil and still decaying Dr. Wolffenstein wakes up, screaming for vengeance! The unlucky teens land squarely within sight of the malevolent medic, and, with the help of his latest creation, the Infiltrator, Dr. Wolffenstein lures them to his secret hideaway with the intention of curing his necrosis and ending his Curse once and for all. Will anyone survive Wolffenstein’s skin melting, limb-hacking Wrath? 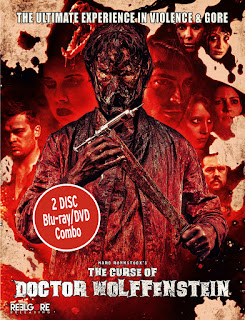