I love companies like the American Genre Film Archive who have made it their mission to preserve weird, off beat and often micro budget regional films. Both of today's viewings were from releases they were a part of. 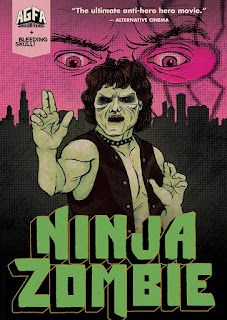 First up was NINJA ZOMBIE which was shot in 1992 on Super 8 on a budget that I would estimate consisted of paper clips and pocket lint. Honestly how can you resist a Super 8 film from the 90s with that title? I couldn't which is why I bought the DVD. To my surprise I had a strange sense of deja vu with the first 15 minutes of the film and had to ask a buddy if this was shown at a VHS swap meet convention we attended a couple years ago. He confirmed my suspicions that I did in fact see part of it while in a dehydrated hungover haze but slept through most of it. That's alcohol for ya. I may have been on the right path because the movie is entirely too long for what it is and has long spells of fuck all going on. When it's good it is incredibly entertaining Z-grade cheese. This is good at 70 minutes, not 90. 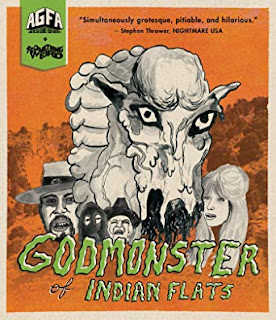 Then there's the 1973 killer goat movie GODMONSTER OF INDIAN FLATS. You read that correctly, a killer goat. And not just any goat, an eight foot tall mutant goat. Sounds awesome right? Well the five minutes of killer goat action we get are awesome. The rest is intermittent scenes of this weird goat being worked on as it grows and surrounded by the redneck townspeople of this small Nevada town creating all sorts of problems with a perspective land buyer who happens to be black and that doesn't sit well with them. It's not a terrible movie but I wanted a giant killer goat running amok and it's barely there.

I have nothing but love and respect for the AGFA but these are two films that had every chance of being amazing nonsensical exercises in schlock and instead they both left me restless and distracted from bouts of boredom.