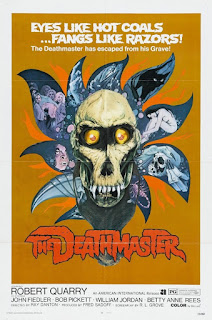 DEATHMASTER had me feeling like Cartman from South Park as a bunch of hippies fall prey to a vampire who infiltrates their little commune by doing nothing more than acting like a bigger hippie. It's rated PG so it is light on violence but it does have some cool sets and atmosphere but it's quite boring as much of the time is spent with hippies doing hippie shit and if they would have topped being hippies for about 30 seconds the whole thing could have been prevented. The last 10 minutes are actually pretty good though and bump score up a bit. 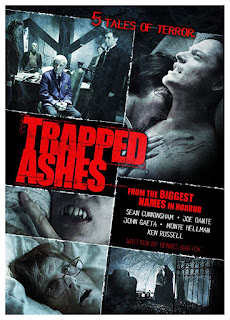 I checked out a semi-recent anthology though being that it's from 2006 I feel like I may be stretching the term "recent"... TRAPPED ASHES. This one was interesting, an oddball telling-of-tales hosted by Henry Gibson as a ghostly movie set tour guide. With directorial efforts from Joe Dante, Ken Russell and Sean S. Cunningham among others there's some very distinct voices and styles that keep things fresh without feeling unrelated. Unfortunately it's a bit underwhelming and the end is of the whole is abrupt and unsatisfying but there are some memorable moments within. If only it had focused on being better at telling horror stories than showing tits all the fucking time it might have risen above mediocrity. 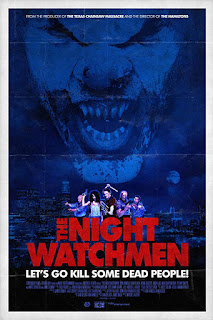 THE NIGHT WATCHMEN was something that was not on my radar to watch this month and if I'm being totally honest I had never heard of it at all before stumbling upon it in the listings for movies on Comcast On Demand. The plot concerning a few bumbling office security guards battling a bunch of vampires during their shift seemed like an easy enough thing to digest while laying in bed waiting to fall asleep and it was. It even (supposedly) took place in my hometown of Baltimore but you'd never be able to tell that from the establishing shots of a city that was certainly not Baltimore. It's easy to get B-roll footage of a city skyline so I'm holding that against them. The movie itself was exactly what I thought it would be, straight forward enough, funny at times but more jokes miss than hit and a story we've all seen a hundred times. It wasn't anything exceptional and it wasn't anything terrible. I didn't care that I fell asleep halfway through and had to finish in the morning but I was interested enough to finish it when I woke up.