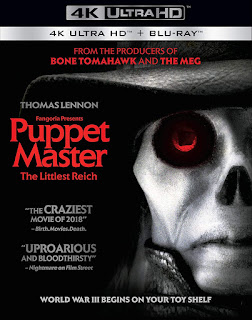 The Film
The Puppet Master franchise is a staple of video store shelves since its inception in 1989 by Charles Band and Full Moon. With nearly a dozen entries it has given us plenty of laughs and thrills, exciting moments and ups and downs. Like many horror franchises that have spawned upwards of this many films it is those downs that really start to plague a series in the latter entries as interest and budgets wain. Puppet Master has been in a tail spin for the second half of its existence as I find nearly everything after part 5 to be a waste of time and almost completely void of any redeeming qualities.

When I heard a new Puppet Master film was being produced by a new team that had little involvement from Full Moon I was skeptcial to say the least but some of that skepticism eased when I learned that S. Craig Zahler, the man behind recent successes such as Bone Tomahawk and Brawl In Cellblock 99, was writing the film and that legendary Italian composer and frequent Lucio Fulci collaborator Fabio Frizzi would be scoring the film that skepticism actually turned into a bit of optimism and excitement. I'm happy to report that my faith was not misplaced and my enjoyment of the film has been confirmed after a second viewing of the film here on this new release but I will not be able to properly express my thoughts on the film better than I did after I was fresh out of that first watch. So I'm going to link that first review HERE where I go in depth on my thoughts on PUPPET MASTER: THE LITTLEST REICH.

The Audio & Video
RLJE Films has delivered PUPPET MASTER: THE LITTLEST REICH to home video on Blu-ray as well as 4K UHD. To say I'm a bit surprised that the film was released on 4K would be an understatement but I'm very pleased that it was because it is absolutely stunning. Colors are true to life but are breathtakingly vibrant. Black levels are the deepest black and detail is as crisp as burnt bacon. While that sucks for breakfast it's great for picture quality. The audio is no slouch either coming in with a DTS-HDMA 5.1 mix that beautifully showcases the raucosness of the film and Frizzi's awesome 80s throwback score. It's crystal clear with no issues of distortion or buzzing or any other sort of imperfections.

The Extras
Extras include a behind the scenes featurette looking at the shooting locations, makeup effects and more, a featurette on the cast of the film and their characters, and a short look at the creation and design of the puppets against their final on screen form.  Also included are early sketches of the Lightning Girl comic seen in the film and a trailer.

The Bottom Line
If this is how Puppet Master is going to be moving forward count me in! All in! I loved it the first time and I loved it the second time and this awesome 4K/Blu-ray combo pack is without a doubt the way to go. You need to see this for your Halloween viewing this year!

PUPPET MASTER: THE LITTLEST REICH is available HERE
Posted by Celluloid Terror (Seth Poulin) at 11:58 AM