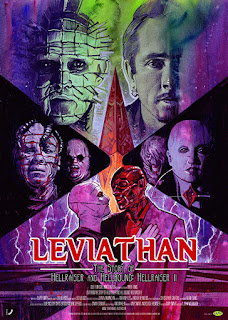 Since hearing about a feature length Hellraiser documentary I'd been wanting to see it and thanks to Shudder, LEVIATHAN: THE STORY OF HELLRAISER PART 1 finally graced my eyes and I must say this is one of the best film specific documentaries I've ever seen. Fans love the Crystal Lake Memories documentary on the Friday the 13th series and Elm Street's Never Sleep Again, but I think both gloss over too much and don't go in depth enough on any entry into their respective series. They're like a Cliff's Notes version of what LEVIATHAN is for Hellraiser. 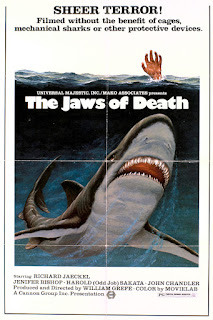 MAKO: THE JAWS OF DEATH is one of the most interesting films I've watched this so far this month. Regional Florida director William Grefe tries to meld a killer shark film, a slasher film and a character study into one as this one centers around a man who has a connection with sharks, believing he was meant to be born as one and was mistakenly born into a man's body. He has a pendant given to him by a shaman that protects him from sharks and he is able to communicate with the local shark population which he has named. When a bunch of slimy poachers, a greedy businessman and crooked politicians threaten the population of sharks he's forced to eliminate the threat to his kin. I love the idea of this one as it is seriously bonkers. Transspecies of sorts? Mixed with a slasher film AND a killer shark movie? Come on, what's not to love!? Well it has a lot of set up and is very talky early on and leaves the good stuff for the end. I'm not sure what was holding Grefe back from making this a full blast horror film that gives us kills and mayhem throughout aside from money but if it had been more evenly paced this would be some sort of cult classic masterpiece. 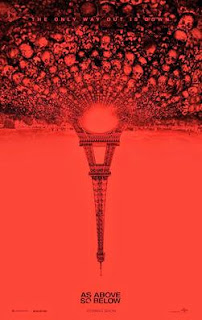 There was a time years ago that I had a mini obsession with the Paris catacombs. The whole idea of them fascinated me and to a lesser extent I'm still fascinated by them today. I'm sure that played a role with my enjoyment of AS ABOVE, SO BELOW but it certainly wasn't the only reason. I'm thankful for everyone over the last year who said the movie was worth giving a chance because when it was released the found footage genre was so far in the shitter that even my curiosity over a horror film set in the catacombs of Paris didn't get me anywhere near a theater to see it. I found it to be tense in moments, unsettling in others and while it does have a number of the found footage cliches it is one of the better examples of found footage horror that I can remember. And yeah, the location is every bit as awesome as I hoped it would be. It's like Indiana Jones meets found footage horror with an incredibly likable leading lady. 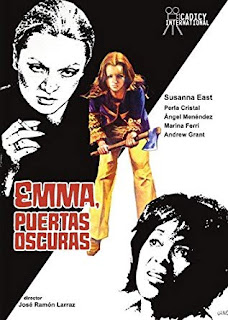 Jose Ramon Larraz is a director that has been pretty dependable as I slowly dig through his filmography and I think EMMA, PUERTAS OSCUROS has the basis for something that would be another winner from Larraz but it simply felt incomplete. This story of a troubled young girl who was adopted after an auto accident by the woman that hit her and goes on a slashing spree when family members show any sign of disapproval towards the child feels like 2/3 of a movie. There's enough to skirt by and claim it is a complete film but it's like getting a D- on a test and being happy about it. Sure you passed but you're better than that. Jose Ramon Larraz is better than this.