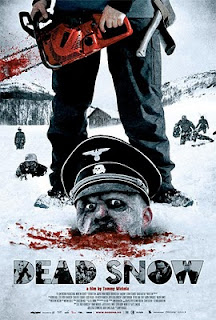 Dead Snow is a Norwegian zombie flick from director Tommy Wirkola. Everything about the marketing for this movie screamed entertaining, fun, and intriguing. It was going to be a breath of fresh air into the stale genre. That is until you sit down and watch it.

The plot of the story is nothing ground breaking- A group of friends is going to a cabin in the mountains to spend their Easter vacation from medical school. Apparently this area is infested with pissed off WWII Nazi zombies that want the treasure they couldn't obtain from some families while they were alive. And of course the vacationing students are caught up in the middle of this.

As soon as the movie starts it comes off as annoying. A few zombies are chasing a girl through the snowy woods but it all comes off as extremely hokey thanks to the blasting soundtrack of Beethoven's 9th symphony (Ode To Joy). The film never recovers from that, the few attempts early on to build suspense fail thanks to breaking it all up with lame humor and cheap jump scares. It doesn't take long for Wirkola to totally forget about any serious tone and completely go for humor.

If you were born with half a brain you begin to feel like you wrote the screenplay for this movie because of how predictable it is. Every turn of the camera, every jump scare, every cue for music is by the book. And by the book is generally boring and uninspired.

There really is little else here to talk about as far as the actual movie goes, there are plot holes (how did "A few soldiers got away" turn into the hundreds we saw a the end as zombies) and questions left unanswered (how the hell did he get the machine gun on the snowmobile that we never saw him pick up). I was also scratching my head most of the movie as to why these Nazi zombies sounded like lions growling, and why the hell did they decide to use a green screen and CGI blood the first time we get to see a zombie in the daylight? The green screen was used as a snowy backdrop... the same as the rest of the movie! Did they just somehow forget to shoot that scene?

I mentioned the music being incredibly loud during the opening, well anytime they had a song playing it was like that. It would kill your ear drums with truly obnoxious Norwegian alternative and nu-metal.

There is a lot that I've left for you to discover on your own if you decide to give it a try. It seems Wirkola's intention with Dead Snow was little more than make a feature length homage to his favorite horror movies. I have no problem with directors honoring great movies that influenced them but little things are enough. Its very amateurish to lift entire sequences and scenes from classic movies.

Its a shame that Dead Snow took the direction it did, it did have some cool moments and the fairly simplistic design of the zombies was good. Dead Snow could easily have been a re-watchable flick and instead was painful to sit through.