If you are at all familiar with sleazy Italian horror you have probably at least heard of BEYOND THE DARKNESS and Joe D'Amato. Quite possibly the most notorious film from the infamous director. The Italian title, BUIO OMEGA, should be a staple in any horror/exploitation fan's collection.

Francesco is a mortician and taxidermist who has just lost his lover, Anna. After her death and funeral Frank can't stand the pain and turns to extreme measures of preserving and stuffing his partner to keep her in his large estate. The groundskeeper Iris has been with the family for many years and has watched Frank grow up and is there to comfort him in a way that will make almost anyone squirm in their seat. As the heated relationship between Francesco and Iris builds so does the body count to keep Frank's secret just that. Anyone that enters the house is prone to Francesco's ever-growing madness to keep him and his true lover together. As the bodies pile up so does the tension with Iris after she makes a proposition to continue to help Frank if he marries her. Eventually the odd couple snap at each other and resort to violence that looks like a cross between jungle animals and lovers that have a truly fucked up sense of the word "love".

Joe D'Amato is well known for being one of the main catalyst's of creating the Italian horror genre and keeping it as sleazy as humanly possible. This wasn't hard for a man who would go on to make porn of both the soft and hardcore variety. D'Amato was never shy of getting nearly every woman that would appear on screen to peel her clothes off for no reason at all. He also amped up the gore to nearly Fulci-like levels. BEYOND THE DARKNESS features everything from slasher film violence to necrophilia to cannibalism. And more. It is one of the gross out, scary films that is a blast to watch over and over.

It had been quite a while since I last watched this movie, mainly due in part to Media Blasters delaying the Blu Ray for a full year, but it was worth the wait. In all reality this movie looks as good as it possibly could. A low budget, low production horror movie from Italy in the 70s, this Blu Ray has its rough spots but certainly looks considerably sharper and clearer than it's DVD counterpart.

With a standout score from the exceptional Goblin this very well may be Joe D'Amato's finest achievement. The man that wasn't opposed to excess of any sort wins with a movie full of excess of all sorts.

Made For TV Horror - Where Have You Gone?

What has happened to made-for-TV horror movies? Back in the 70s and 80s and even into the 90s we got some real quality horror movies that were made for TV. The 70s gave us the great Salem's Lot, an adaptation of a vampire story by Stephen King. Gargoyles, featuring effects from the late, great Stan Winston and you'd find a quality movie Don't Be Afraid Of The Dark and The Night Stalker. The 1980s gave us Dark Night Of The Scarecrow, which old and new fans alike have been able to discover or re-discover on DVD since it was released a couple years ago. It even has a scheduled Blu Ray.

You may be thinking of movies that you're pissed I didn't list but that isn't the point. There are plenty of websites to see a list of good (and bad) made-for-TV horror movies. The point is asking what the hell happened to them. Sure even in their heyday they weren't all good, and some were down right awful (I'm looking at you Devil Dog: Hound of Hell) but the level of film making was obviously miles above any sort of made-for-TV fare we get today, which seems to be limited to SyFy channel originals. Now, those SyFy originals aren't all bad, if you enjoy a few beers... or a 12 pack they can be cheap fun... some of them. The fact is that is about all we have anymore for TV horror and most of them are headache inducing shit fests. Even the next closest thing, Direct-To-Video, has gone to shit. That is another discussion for another day though.

It just seems that TV has completely been disregarded as a legitimate means of breaking a new director or getting your script into production. When is the last time we have seen a tried and true director like Dan Curtis (1973's Dracula) get to make a movie for TV? I know there are scripts lying around, wasting away, that would be successful on the smaller screen. And where would Steven Spielberg be without his 1971 picture Duel.

It isn't like there is a shortage of channels that are dedicated to horror or make horror a large part of their programming. FearNet, Chiller, and the aforementioned SyFy. Maybe SyFy is the answer to bringing back this lost love, but not in their current form. Maybe if they put more emphasis on quality in simplicity instead of making a giant monster movie on a soap opera budget. Maybe. Hell, many of the best made-for-TV horror movies played on network stations like ABC. Is it the times? Is it that people are so uptight and worried that it may spoil their child's fragile little mind that no station wants to play it? Is there no money to made from advertising and ratings? I'm sure it is a combination of all of that.

There are so many great movies that never made it into a theater that wouldn't go unnoticed because of the made-for-TV movie. It is really a shame that the style is pretty close to dying currently. Sure every few years we get something, and recently we had the Masters of Horror series which divulged into Fear Itself but that was so toned down for network TV that no one cared. Other than that there seems to be nothing, and not much desire to bring it back. That's a shame.
Posted by Celluloid Terror (Seth Poulin) at 9:55 AM No comments:

Labels: Horror, Made For TV, Rant 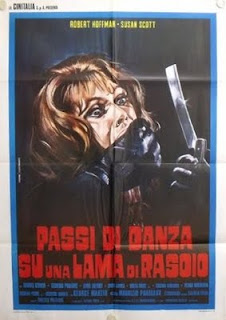 How can one giallo fit in every calling card of the genre and drive them into the ground so that you're so aware of the type of film you're watching that it borders on no longer being enjoyable? I'm not exactly sure but director Maurizio Pradeaux manages to get damn close to doing just that in DEATH CARRIES A CANE.

Kitty (Susan Scott, All The Colors Of The Dark, Adios Sabata) is thrown head first in to a murder mystery when she accidentally witnesses a murder threw a park's coin operated viewfinder. After her fiancee is suspected of the original murder and subsequent killing of other witnesses, Kitty clears his name but they are thrown even deeper in to the madness which now surrounds everyone close to them. As the body count piles up and the police fail to capture the killer with their bag of tricks Kitty comes face to face with the killer who has separated her from her lover and sister.

DEATH CARRIES A CANE manages to fit every trademark of the genre into the 85 minute run time. We have the classic killer wearing all black to hide their identity. More red herrings than you can shake a stick at, hell even inanimate objects become false leads here. The nudity and sex is so gratuitous that you really stop noticing it about half way through. I'd be willing to bet every woman aside from one in the movie gets naked. The problem is that these staples of the giallo are beat to death so bad that they really stopped being entertaining. Even the reveal of the killer's motive was just plain stupid.

There are some positives in DEATH CARRIES A CANE. Pradeaux has solid direction throughout, and even if the story is a bit disjointed due to the fact that it seems like it wanted to outwit itself, it does flow pretty well and pacing is fine. This would be a decent giallo had their been some more tension built around the kill scenes. What we end up with is less suspenseful than your typical teeny bopper slasher film. The score was fairly typical and sounded very familiar and I wouldn't be surprised if it was lifted from an earlier film.

A rather unremarkable film that only giallo enthusiasts need track down.