TrollHunter has been on my radar for many months now. As I've found out more about my interest slowly grew and grew until I was able to see it tonight thanks to a friend shelling out the $6 for the On Demand presentation.

This is a "found footage" movie, you know the kind- Some tragic event that was captured on a handheld video camera is presented in the point of view from the crew that usually have gone missing. These movies have become pretty prevalent since 1999's The Blair Witch Project. With very mixed results. TrollHunter is the story of a small film crew from a local college in Norway searching out a local bear poacher as the bear population of the country is tightly controlled. They quickly run into Hans (Otto Jespersen) who they believe to be the poacher. It doesn't take long to discover that is actually an aging, and jaded government worker who is out to control the troll population that is kept secret by the Norwegian government.

Hans allows the group to follow him in his confidential work because he's become fed up with his thankless job. The group does what any crew looking for their big break would do and subjects themselves to the dangers that various types of trolls bring. After several violent encounters that leave the crew battered and bruised, and down a man, Hans goes to find the giant troll in the snowy mountains that is the cause of all of the problems for a wild finale.

TrollHunter is briskly paced, getting from point to point with little down time in action or troll hunting. The acting is engaging and believable and the story, while silly on paper, is a great grown up fairy tale. The visuals are fun and at times breathtaking, with really great effects on the monsters themselves. The filmmakers did a great job in creating a diverse group of breeds with each having it's own characteristics and design. From the Mountain King to the Ringlefinch and the gigantic Jotner, Norway is infested. And I couldn't be happier about it because that was a fucking blast. I wish all fairy tales were this cool. 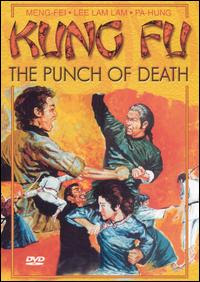 I will say that I'm sorry that it took this long to get to the next entry of this series. At this point you've probably figured out that the set is broken down into "double features" and I simply was not in the mood for an Italian gangster film. God forbid I skipped one because I needed some guaranteed fun in my life. And how can a title like Punch Of Death not be fun?

I'll never quite figure out how this boxset came to be. There is no way one single man masterminded the whole thing. The movies, the transfers, the dubs, the packaging. This had to a team hellbent on shoddy transfers and shit releases. The Prodigal Boxer aka Kung Fu: Punch Of Death is another okay film subjected to this set. Punch Of Death is a Kung-Fu film based on a pretty typical story of one man having to avenge another's demise. And that is really putting much more into the film than is actually there. It really is that simple.

There is plenty of action here, enough to keep me well entertained while enjoying some brews. It even replicates the attitude of a solid spaghetti western at times during the story which aids it along because the story on it's own is thin and pleading for anything entertaining. This movie is for any fan of classic Shaw Brothers material but it never does get to their level. This is a movie to watch on a boring Friday night with some beers.

Hello readers, this is a short entry to let you know that a few reviews of mine are up on www.infini-tropolis.com Infini is a great cult/horror film site that any reader of this blog would be a huge fan of. It is free of internet douchebags, it has great reviews and features and a message board full of cult fanatics that are sure to have you thrilled with all sorts of new material you need to check out.


There you have it. A life changing website that has been handed to you on a silver platter... Go and contribute!

Posted by Celluloid Terror (Seth Poulin) at 10:54 PM No comments:

I tried to settle down on this one a little by sleeping on it. Please believe me in saying that I really did try.

Emily Jenkins (Renee Zellweger) is a state social worker just assigned with a new case (you guessed it, her 39th) on Lily Sullivan who is showing signs of neglect. After an uncomfortable visit with Lily and her parents, Emily takes up an interest in Lily and after receiving a disturbing phone call Emily rushes over with her detective friend Mike (Ian McShane) to discover Lily is in the process of being burned alive by her parents in the oven. Lily is freed, her parents institutionalized, and Emily petitions for custody of the child until a permanent foster home is found for her. Not soon after, it becomes clear that Lily isn't the sweet innocent child she seems to be.

CASE 39 is a movie that you watch and think "I'd rather have stepped in a pile of dog shit". Seriously. We are supposed to be terrified of this little girl who can basically make you hallucinate your fears and drive you mad until you kill yourself and plant murderous thoughts in your head and is just all around evil. The movie could have been over well before Emily ever took custody of her had Lily's parents just shot her or cut her throat or anything less dramatic than throwing her in the fucking oven. The characters are so painfully paper thin that we don't care how they meet their end whether it be stabbing themselves in the eye with a fork(when did we start giving metal forks and steak knives to violent crazies inside the hopsital!?), or being chased by bees (in a scene that makes Nic Cage from The Wicker Man remake look good) and killing yourself in the bathroom it just doesn't matter. The acting is wooden and the editing awkward and choppy. And fuck the pacing of this movie. 109 minutes. 109 minutes of staring at Renee Zellweger's scrunched up "I can't fucking act so I'll just be ugly to cover it up" face is too much to handle. She ruins just about every movie she's in and while this one wouldn't have been saved by someone else, at least they wouldn't have been Renee fucking Zellweger.

CASE 39 was filmed in 2006 and sat on the shelf in almost every country it was released in until 2009, the USA waited with overflowing anticipation until October of 2010. And boy, what a treat we got. Demon child who is apparently really hard to kill and knows all of your thoughts but can be tricked into drinking tea with a crushed up sleeping pill in it? And then when she falls asleep from that pill you soak the whole house in gasoline EXCEPT FOR HER FUCKING BEDROOM? ARE YOU KIDDING ME? FUCK OFF. And don't even try to tell me that soaking her door counts. The bitch has a window.

Seriously one of the worst movies I've ever seen.
Posted by Celluloid Terror (Seth Poulin) at 7:06 AM No comments:

What do you get when you put Aunt Becky from Full House, bad 80s music, too many montages and a pack of small town high school drug dealing gang members together? THE NEW KIDS.

When Loren (Shannon Presby) and his sister Abby (Lori Loughlin) lose both of their parents in an accident they move to a small town in Florida to live with their aunt and uncle who have just purchased a run down amusement park to fix up. All seems well as the siblings help their aunt and uncle and attend their new high school until the local trouble makers, lead by Gordo, place a bet on who can go to bed with Abby first. After several unpleasant encounters which don't lead any of the hooligans to the sack and hurt their ego and light their temper the gang decides to vandalize the newly renovated amusement park and their prized Cadillac. After a few nastier and more personal encounters Loren decides to end it and beats up one of the gang in the school parking lot to cheers of his friends and classmates. It is this moment that causes Gordo to go over the edge and want blood. Abby is kidnapped during a school dance and tortured by the gang until the final bloody showdown inside of the amusement park's walls.

Director Sean S. Cunningham, best known for popularizing the slasher film with 1980's Friday The 13th, gives us a somewhat nasty thriller that is really a story of two halves. The first half is a decent set up but we are required to really believe that these redneck teenagers are some major threat to the town and are dangerous without seeing to much to make us believe that at all. Five or six hick kids with shotguns in the back of a pickup truck just shooting into the air isn't all that frightening. Eventually we get to see their nastier side before the finale which was an important save. The soundtrack is as 80s as it gets, and not in a good way. Every time there is a montage, and there are plenty, we get a song that really really wishes it was in any better 80s movie. When we aren't being treated to such soothing songs of empowerment and triumph we get to listen to an ill-fitting score. The thing that keeps THE NEW KIDS from being more of a stand out 80s movie is the weak first half and that it feels like a movie wanting to be an 80s movie.

For all of its flaws and the fact that it is certainly dated THE NEW KIDS succeeds moderately as a revenge thriller.