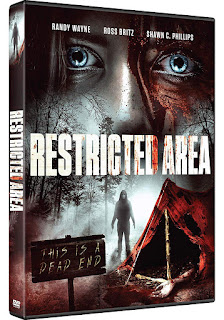 Believe it or not one of the last brick and mortar supporters of indie horror is Wal Mart. Each month they dedicate a section of their media department to low budget new releases, many of which are horror. It's quite cool but one must approach this section with caution because there's certainly hidden gems to be found but you're far more likely to encounter uninspired ripoffs of more mainstream films. Or worse...

One of the DVDs you'll find staring at your from the store shelves at the time of publication is RESTRICTED AREA, a 2019 slasher film written and directed by Christopher M. Don. It's the perfect example that not everything in this section is going to be a winner. I'll start with the best points of the movie which may be the acting and these are no award winning performances. The cast is made up of small time actors trying to make their way in the independent scene and Youtube personalities. In a better film the performances may have bothered me but I found them to be mostly passable for a film such as this. There was plenty more to endure for the film's incredibly bloated 112 minute run time. I don't think most Hollywood slashers need to be much more than 90 minutes and almost never can they fill out two hours. It just isn't the type of story that needs that type of length or even benefits from it. If we're talking indie slashers? I think the sweet spot is even closer to 75 minutes. From years and years of watching these things it just seems that's what the production's budget can handle as far as personnel and locations go. 112 minutes is just ridiculous. I understand wanting to use the footage you worked hard to get but editing is the thing that gives the audience a sharp, sleek viewing experience. If it doesn't add something to the film does it need to be there? Dragging the film out only made my viewing experience worse which made my feelings toward the film worse and it dragged on and on and on. It made the awful natural light that washed out half the picture and left the other half in shadows more irritating, it made the lack of locations more prominent, and it made one of the killer's stupid white webbed belt even less intimidating than it was the last time i saw one at Pac Sun. Editing. Learn it. Love it.

RESTRICTED AREA was a grating viewing experience. When you're searching the shelves of the independent film section at Wal Mart caveat emptor.

Posted by Celluloid Terror (Seth Poulin) at 2:13 AM No comments: