So the trailer for Hellraiser Revelations was just released and my first thought was You have to be kidding me. Where's Ashton because I'm being punked". It looks like a fan movie, in fact I've seen fan movies that look better than this. The entire thing just looks cheap and full of make up and props you could buy at a Spirit Halloween store any year when October rolls around. Now you may be asking how I could gather enough of an opinion on this movie from a 2 minute trailer so here it is -

Now do you understand? It isn't like this series was trash from the beginning and each sequel just got a little worse than the one before. The first two films are widely regarded as classics of horror cinema and are works of Clive Barker (who directed the first). Even the third installment, Hell On Earth, is a bit of campy fun. The rest of the series is really hit or miss, mainly miss, but with some troubles during production of Bloodline and a few scripts that threw in Pinhead and made it a Hellraiser movie, it hardly matters and doesn't take away from those first two classics. They're dark and haunting, they feature creatures that were formerly human but now look as if they truly are disfigured and evil. Not like a shitty actor who can't deliver his recycled one liners from the original in a $50 costume from the clearance rack on November 1st. Clive Barker has already stated how this isn't his work and that he doesn't support it at all and 8 films (even when the movie was fucking awful) would be ashamed to be connected with this new asshole.

The Weinstein brothers want to know why their Dimension/Dimension Extreme label is constantly on the verge of bankruptcy? It is probably because they poor their fucking money into complete and utter bullshit like Hellraiser Revelations. They might have made some money off of this thing had they not released a trailer for it off of the title alone. A few poor unsuspecting saps would pick this up and realize they've been duped. I really hope everyone involved in this gets shit on, literally. That seems fair for my eyes and brain having been shit on for 2 precious fucking minutes of my life.

I've had a Revelation that Hellraiser really is dead for good.

Posted by Celluloid Terror (Seth Poulin) at 11:22 PM No comments:

I remember seeing this movie on DVD at Wal-Mart everytime I went into a Wal-Mart for a few months around the time it was released. It looked pretty craptacular back then and I thought "what the fuck, lets watch it" tonight when I saw it was available on FearNet in HD.

The story is Tamara is a very intelligent but weak, bullied, loser girl in her senior year of high school who is in love with her charming, kind English teacher. She also has an affinity for witchcraft Her bullying gets worse after a local newspaper article exposes steroid use among the local high school sports stars. After luring her to a local motel with her teacher love as fake bait, the jock stars get video of her stripping and a deadly struggle ensues. After the reality sets in for the popular kids that they'll be convicted of their crime they decide to bury Tamara. A new sexy, confident Tamara walks in to class the following Monday to the surprise of all the kids involved. Tamara has come back from the dead thanks to a spell and now she will kill anyone in her way from getting her way with the one she loves.

TAMARA had far more positives than I expected. The stereotypical movie high school student was well represented but it worked and they even brought a few laughs. In fact, the acting overall was competent. The problem is that the movie goes down the road of shit slasher film as soon as Tamara comes back from the dead. It turns in to nothing more than any run of the mill body count film with a psycho cunt witch bitch in control of the knife wielding maniac. It became boring fast and extremely preditcable. I have very little else to say because there isn't much else to say. It is what it is. With (more than) a few beers it was a cheap time waster, but not a very good one. That said, it did exceed my very low expectations. 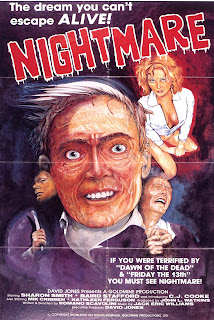 After years of broken promises and delays NIGHTMARE IN A DAMAGED BRAIN has finally made it's way to DVD thanks to the folks at Code Red. Released simply as NIGHTMARE, I was pretty excited to see this Video Nasty for the first time after hearing about it for years.

George Tatum (Baird Stafford) is a potentially homicidal schizophrenic who suffers from seizures which are accompanied with disturbing fever dreams of a young boy attacking a woman and his father with an axe during the adults having sex. Tatum has is now wandering the streets with only an experimental drug to keep him sane. Over the course of 6 days he makes his way down to Florida, leaving a trail of blood in his wake. As his dreams get worse so do the killings until George is confronted with his past.

Writer/Director Romano Scavolini delivers what would become one of the most notorious slasher films of the 80s and one of the more disturbed as well. Baird Stafford does well in playing a mentally disturbed man who is torn up over what he does to people but the acting won't win any awards. This is your typical slasher film when it comes to acting, a few decent performances with a lot of overacting and some truly obnoxious characters (the mom!). There is enough of the red stuff to keep all of the gorehounds happy, and the effects are pretty damn good. This movie has one of the best decapitation scenes I've had the pleasure of viewing. Pacing may be one of the biggest problems about NIGHTMARE. Scavolini left rather large chunks of time with not a whole hell of a lot happening except for annoying characters to get under our skin just a little bit more. There are some killings during these stretches but some of them are off screen so there is minimal pay off.

After years of hearing about NIGHTMARE IN A DAMAGED BRAIN I was a mixed bag of reactions. Did it totally live up to the hype? No, not really. Was it entertaining? Yes, especially the final half hour or so. As most horror fans know dozens of movies were given the infamous "Video Nasty" tag in the UK during the excess crazed days of the 1980s and many are notable for that alone as they aren't very good. NIGHTMARE has enough entertainment and madness to keep your attention. If you're a fan of the gory body count films of the 80s you'll definitely get some enjoyment out of this.