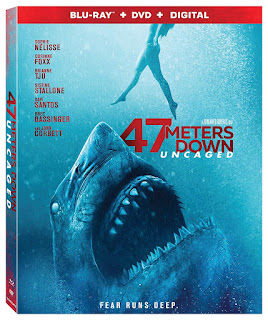 The Film
2017 saw the release of Johannes Roberts' tension filled shark thriller 47 Meters Down which was featured a simple idea of two sisters being stuck on the Ocean floor, locked in a shark cage as their oxygen depletes. The film was flawed but it had a decent premise and some good production quality. I don't remember anyone clamoring for a sequel but that didn't stop one from being made and this time there's no cage.

47 METERS DOWN: UNCAGED introduces an entirely new story and set of characters featuring four teen girls who sneak into an underwater archaeology site of a newly discovered sunken Mayan city. This diving adventure starts well enough until an accident knocks over some massive statues and some blind deepwater sharks enter the fray making the desperate search for another way out before their oxygen levels deplete all the more dangerous.

The Mayan city setting was absolutely stunning and I wish we somehow could have had more of it before all the dust gets kicked up and this becomes another shark attack film. The deepwater sharks and fish have an eerie translucent glow about them but their CGI rendering is spotty at times and there's some genuinely stupid moments like when a fish literally screams at one of the girls for a jump scare. This moment where any sort of serious filmmaking jumps the shark (punny punny) and took me out of it to the point where I struggled to settle back in for a while. I did appreciate that there's a good amount of shark violence and not just stalking around and near misses, specifically in the ending scene that cruelly throws the survivors into the jaws of these killer sharks almost relentlessly.

I found 47 METERS DOWN: UNCAGED to lack the tension and acting quality of the original but did give us some eye catching set pieces and shark action but it relies on repetitious situations, and largely poor looking sharks. It's inoffensive but nothing more.

The Audio & Video
Lionsgate delivers 47 METERS DOWN: UNCAGED on Blu-ray with a beautiful looking 2.40:1 anamorphic widescreen transfer that features stunning clarity with vivid colors and high levels of detail. Black levels are deep and inky and the picture quality is as gorgeous as the locations featured within. The English audio is presented in a 5.1 DTS-HD Master Audio mix with optional English SDH and Spanish subtitles. The audio is crisp and clear with no crackling, popping or other imperfections. The mix is nicely done and mixed well across all channels with proper balance in dialogue and soundtrack.

The Bottom Line
This isn't reinventing the shark movie wheel by any means. Its familiar territory that could possibly make for an okay use of time on a rainy Sunday afternoon but otherwise you can do better.

47 METERS DOWN: UNCAGED is available HERE
Posted by Celluloid Terror (Seth Poulin) at 10:54 PM No comments: 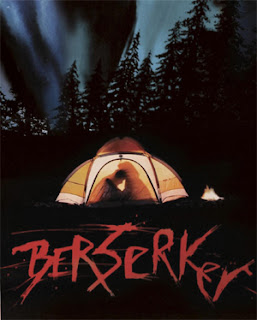 The Film
A group of teens set out on a trip to the rural forests of Utah. They're warned of a recent slew of bear attacks by Pappy, a Norwegian immigrant who oversees the campgrounds. The local Nordic population has spread stories of brutal viking warriors called Berserkers which the teens share stories of while getting drunk and partying but quickly realize that bears may not be the only thing stalking the woods. 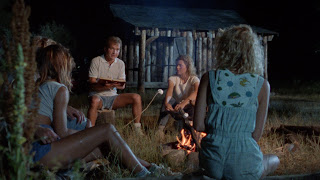 BERSERKER is a low budget regional slasher that makes the most out of limited sets and interiors by giving us a spooky and moody camping trip filled with some mostly likable characters except for Josh (Greg Dawson) who is almost too easy to hate. The simple use of foggy tree lined exteriors and shots of a pacing grizzly, even if he is obviously contained in some fashion, are enough to make create an eery feeling which is punctuated by mutilated bodies and an aggressive body count.

Production values are simple and this will never be considered a classic of the genre but it is a cult classic and I can related its cult classic standing down to a single scene at the end of the film where SPOILER we get a real life bear wrestling scene SPOILER and it's absolutely fucking bonkers. I don't find BERSERKER to be a one hit wonder with that scene, I genuinely enjoyed the entire movie and thought it was a solid slasher film.

The Audio &Video
Vinegar Syndrome has given BERSERKER a brand new 2K scan and restoration taken directly from the original 16mm camera negative with great results. Even though it was shot in 16mm this new Blu-ray has excellent detail and sharpness. Black levels are deep with no signs of blocking. There's a natural and plentiful grain structure and colors look healthy. The English audio is presented in a DTS-HD Master Audio mono mix with optional English SDH subtitles. The audio is crystal clear and crisp with no signs of distortion. The mix isn't very dynamic but the high quality production on this blu-ray is more than adequate. 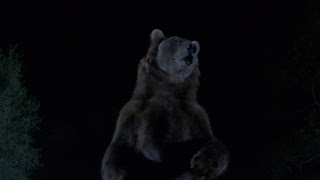 The Extras
This Blu-ray includes a trio of video interviews with cast and crew from the film including writer/director Jef Richard and stars Joseph Alan Johnson and Shannon Engemann along with an audio interview with actor Mike Riley. A still gallery rounds out the special feature. 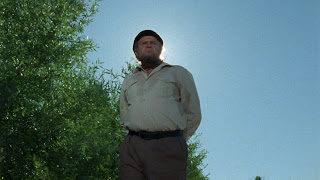 The Bottom Line
I'm very pleased with this release top to bottom. It will make an excellent addition to any slasher fan's collection.

BERSERKER is available HERE
Posted by Celluloid Terror (Seth Poulin) at 12:27 AM No comments: