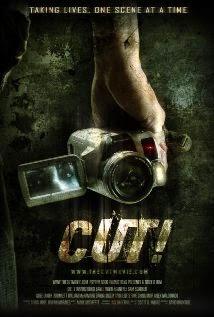 Travis Simon (David Rountree) is an aspiring film maker working at a film equipment rental warehouse fulfilling orders to help other film makers make the movie of their dreams. Along with his friend Lane (David Banks) who is on parole, they aim to make their own hit horror film by scaring real people. Things quickly get out of hand and someone dies from their tactics. Lane decides this is the way to make a truly terrifying and realistic film, and reluctantly Travis agrees, driven by the dream of making a successful film.

CUT! caught me off guard as I had heard nothing about it prior to viewing the film for this review. The film is successful on all levels, but the foundation is in its fantastic screenplay. David Banks and David Rountree nailed a story and script that is simple and effective complete with a couple of twists that the viewer won't see coming and will turn the entire film on its head. A well done plot twist at the climax of a film is something of a cliche these days and one that most films don't manage to pull off. CUT! pulls it off and really makes the film that much more interesting and special at the end.

Rountree and Banks play very well off each other as the nerdy dreamer with his head in the clouds and the asshole, "fuck the world" friend made bitter by a stint in jail who is quite unlikeable.  The dichotomy works very well in progressing the actions and decisions of the characters in getting to the final product. The supporting cast is also pretty damn spot on. There's no performances that the audience needs to overlook as a downside to independent horror films. The special effects work is also good, with a good amount of blood being spilled. The negative here is that much of the violence is off screen, which is important to the context of the film but as a horror film it may leave the audience wanting a bit more in the way of gratuitous violence and gore.

CUT! came out of left field and is a tight character study in to the mind of someone that will do anything to create the art he loves. Horror fans should appreciate this approach and the success of the performances and the script.

Thank you so much for taking the time to watch and review CUT! I know how valuable your time is and we greatly appreciate you sharing your opinion. Thank you!