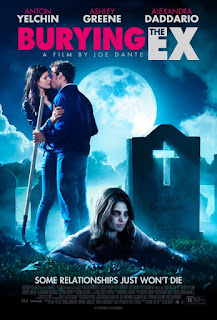 What do you get when you take a painfully dry lead, a pair of gorgeous women as his love interest, a dark comedy horror script and some cheap effects? You get BURYING THE EX, of course.

The horror movie loving Max (Anton Yelchin) lives with his self important vegan hippie girlfriend Evelyn (Ashley Greene) but their rocky relationship comes to an end when Evelyn is killed in an auto accident. Max begins a relationship with fellow horror lover Olivia (Alexandra Daddario) despite Evelyn returning from the dead to come back to Max to fulfill their promise of being together forever. Max tries to hide zombie Evelyn from his new found true love but eventually the skeletons, or in this case zombies, will come out of the closet.

Joe Dante is no stranger to making some classic horror films such as The Howling and Piranha and some comedy films driven by horror elements like Gremlins and one of my personal favorite films The Burbs. Dante has proven time and again that he can cross genre boundaries and come out on top which leaves me baffled as to why he failed so hard with BURYING THE EX. First thing's first and that is the script- Alan Trezza wrote the script for this film, Trezza wrote the original short film of the same title in 2008. His only other screen credit which is likely his most known effort is a family comedy featuring *NSYNC members Lance Bass and Joey Fatone. Yup, that's who handled this script and it is no surprise that this horror comedy is light on horror and even lighter on laughs. Really, this script has a handful of laughs and the rest isn't even groan inducing bad, it's no reaction at all bad.

The horror isn't much better. It is lighthearted as intended which is fine but there's only two moments of horror, and they're just "okay". That's the biggest compliment I can muster for them because they're filled with really poor CGI. Ashley Greene is genuinely good as the undead, insufferably self important girlfriend. I wanted so badly to punch her in the face which is more or less the point of her character. Unfortunately Anton Yelchin's performance as Max made me not care at all if he manages to break away from a girl that doesn't respect or care about his interests or dreams. Yelchin comes off as completely disinterested and is a total bore to watch. His living love interest Olivia does well as the edgy but passionate contrast to Greene. The unsung hero of the film may be Max's (half!) brother Travis (Oliver Cooper) who is a pretty big loser but manages to sleep around with plenty of attractive women. In a movie that is driven by (attempts at) comedy Travis is the comedic relief and is usually on point.

The movie plods along in an unfunny manner as we await Max to take care of his undead girlfriend problem and the thing that kept me most interested was the constant horror film references. From the films on Max's TV such as The Gore Gore Girls, to various Hammer and B-movie horror films to a graveyard screening of Night Of The Living Dead and various horror movie posters scattered around, this may as well have been a game of I Spy: Horror Edition.

That's not a great recommendation for the film- "Go see it for all of the horror references throughout!". No, sadly what would probably be a commendable first directorial effort for a rookie filmmaker is the product of a seasoned veteran who has flourished in this genre and makes a remarkably unremarkable film. Joe Dante, you're better than this.
Posted by Celluloid Terror (Seth Poulin) at 1:20 PM