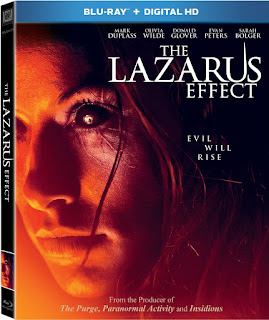 The Film
A group of medical researchers has developed a serum that will extend the amount of time a doctor has to revive a patient after death, hopefully without any adverse side affects or implications to the patient. An accident during a test leaves one of the members electrocuted and without a pulse so the group makes the decision to use the serum on her to attempt to revive her and what wakes up isn't the same person they knew.

THE LAZARUS EFFECT features a capable main cast that are all quite good and likable. The ability to connect with these characters makes the film that much more personal. The film's horror elements come from both a realistic medical and a bit more of a post-mortem "pseudo reality" which I found elevated the film above the standard demonic possession type movie I was prepared for.

The trailers for THE LAZARUS EFFECT didn't play up the medial or moment of death angle that the movie takes from what I remember and I think it sells the film a little short. The film raises interesting theories about the human brain and what happens at the moment of death and put it into a horror film that is unfortunately held back by its PG-13 rating. I have no doubt that this film would have been more successful and a better horror film overall had they been able to go farther and more extreme with the horror elements.

The audience deserved to be completely blasted by disturbing images of the moment of death instead of the poorly rendered CGI visions we received (which managed to still almost work). The medical side of things could have been nastier and more exploitative for our fallen protagonist as bringing her back was sort of a life or death scenario and certainly ended up being that way.

THE LAZARUS EFFECT isn't bad. I enjoyed it far more than I thought I would from the trailers and TV spots but it left me wanting more from it. This is a watered down version of a good movie that is lurking in there somewhere and it's a shame we didn't get to see the full unadulterated product.

The Audio Video
If there's one thing we weren't cheated on it was the Blu-ray presentation from Fox. The 2.40:1 anamorphic widescreen ratio is flawless with a sharp presentation, beautiful skin tones and not a hint of DNR or edge enhancement. The picture is crisp and I couldn't ask for nicer. The DTS-HD Master Audio track is a 5.1 surround mix that is bold and boisterous when it needs to be. The mix is spot on and crystal clear. There's no damage or background noise to mention. A really well done job on the A/V side of things.

The Extras
-"Creating The Fear: The Making of THE LAZARUS EFFECT" - a behind the scenes featurette that runs about 15 minutes
-"Playing God: The Moral Dilemma" - another featurette looking at one of the questions the film asks
-Deleted and extended scenes
-Theatrical trailer

The Bottom Line
While I'm disappointed that this film didn't give me more of what it had I have to admit that it surprised me by not being terrible. The film holds itself back and the PG-13 rating doesn't help but THE LAZARUS EFFECT is worth a watch for less jaded fans and fans of recent fare such as Insidious and Sinister.