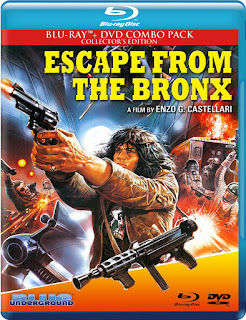 The Film
A corporate mega power has decided to redevelop the Bronx which has long been declared "no man's land" and a lost cause. Relocation efforts to send residents to "lovely New Mexico" has resulted in hold outs from lifelong residents and the gangs that run the territory. The relocation efforts have turned into death squads being sent in to eliminate any hold outs which starts a war as the remaining gang members and residents have armed themselves and are ready to kill for their right to stay.

The sequel to 1990: The Bronx Warriors was shot a mere 18 months after the success of the first film and ramps up the action quite a bit. What the original gave us in terms of creative characters and eye catching and attention grabbing costumes and set pieces on top of plenty of action takes a more is more attitude for the violence and it pays off. Trash and various survivors from the first film are back to take on the faceless, silver clad, flame thrower wielding death squad goons and there's almost non stop fights, shoot outs and explosions.

ESCAPE FROM THE BRONX also seems to be a bit gorier than its predecessor. This isn't Fulci level horror gore but there are some effects going on in terms of blood and burns. The acting again is hit or miss and our handsome muscular lead from 1990 is now a jacket wearing leader here as he lost most of his muscle mass between shoots much to the chagrin of director Enzo Castellari.

Where 1990: The Bronx Warriors shows its obvious influences, ESCAPE FROM THE BRONX takes those influences and just blows them to hell. I really can't sum up how fucking fun this movie is. There are multiple moments where vehicles are blown up with only one or two gunshots from a long distance. It's that attitude that drives the entire movie. Enzo Castellari isn't worried about keeping things grounded, and we shouldn't care that things are far from grounded. The more is more attitude really works in making ESCAPE FROM THE BRONX an immensely entertaining film.

The Audio & Video
This is how it should be done! Blue Underground's 2.35:1 anamorphic widescreen transfer has a wonderfully vibrant color palette. The colors are bright and beautiful while the overall picture quality has a great crispness and sharpness. Skin tones are natural without any waxiness. The English audio track is a DTS-HDMA mono track with optional English, French and Spanish subtitles. This audio track is crystal clear and is free of any background noise or damages such as crackling or popping.

The Extras
-Audio commentary with Enzo G. Castellari
-Enzo G. Castellari and Fabrizio De Angelis In Conversation Part 3 of 3 - the fantastic conversation continues and concludes with more great stories. A complete joy to watch these two friends and collaborators reconnect.
-"The Hunt For Trash" - Interview with BRONX WARRIORS superfan Lance Manley - This featurette documents Manley's search for Mark Gregory who starred as Trash in the Bronx Warrior films and dropped out of the public eye in 1989. Pretty fascinating stuff.
-Theatrical trailers
-Poster and stills gallery
-DVD copy of the film

The Bottom Line
I've seen ESCAPE FROM THE BRONX numerous times and have loved it since my first viewing of it on a shoddy Vipco import from the UK years ago. I don't think I've ever had more fun watching it than I did this time getting to see it in beautiful HD in all of its glory. It is long overdue to become a cult classic.

ESCAPE FROM THE BRONX is available HERE
Posted by Celluloid Terror (Seth Poulin) at 4:18 PM