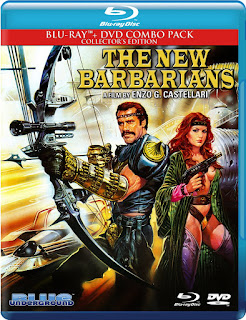 The Film
The world has been shattered by nuclear war and the remaining survivors fight to survive amidst the roving gang known as The Templars led by their vicious leader One. A solitary warrior known as Scorpion (Timothy Brent) rescues a beautiful woman from The Templars and teams up with Nadir (Fred Williamson) and a fairly rag tag group in a fight against the brutal gang in hopes of reaching a distant land where a society is rumored to exist.

THE NEW BARBARIANS was one of my post-nuke type films to come in the wake of Mad Max being an international hit. The film is brimming with futuristic costume designs, charismatic characters, gore and extremely clever and downright cool vehicle and weapon designs. As cheesy as it may be there is a natural swagger and cool factor that comes along with THE NEW BARBARIANS.

The story is a simple one of survivors trying to find their way to a place where life isn't just about surviving but flourishing and adding to a community. Things are never that easy, especially with George Eastman leading The Templars' thirst for violence and supremacy over the wasteland. Eastman's group has the coolest cars and bikes that are packed with guns, lasers and various implements of death such as rockets and rotating blades. There's no shortage of heads and limbs flying in THE NEW BARBARIANS.

THE NEW BARBARIANS may be a product cashing in on the success of a better known film but it goes heads and shoulders above and beyond almost any other movie in the post-nuke apocalyptic action film category.

The Audio & Video
Do I need to go into at this point? Blue Underground's transfer is stellar. Anamorphic widescreen  very natural looking grain structure, beautiful vivid colors and great detail and sharpness coupled with the DTS-HD 1.0 mono track that takes the original audio and makes it sound perfect. Yeah, I'd say that's stellar.

The Bottom Line
THE NEW BARBARIANS out Mad Max's Mad Max and is a wonderful slice of post apocalyptic cheese. Highly Recommended