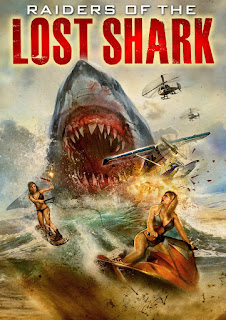 The Film
A group of friends are terrorized by a giant weaponized shark that has escaped from a secret facility. Their college professor may have the knowledge to help them but its a battle to survive until help arrives.

I watched RAIDERS OF THE LOST SHARK while feeling a bit under the weather and not in the best of moods. The sheer ridiculousness of the entire thing ended up putting a smile on my face. This is not a good movie by any means. The shark effects look like a cheap plastic bathtub shark toy was super imposed on the screen and when someone is eaten by the shark they simply disappear with little or no trace. The acting is hilariously bad but instead of overacting we get incredible underacting. Watching the complete lack of emotion when friends are eaten or a plane explodes or meeting some strange scientist in the woods is a treasure I've only seen in this film. It really made the whole experience a bit surreal. 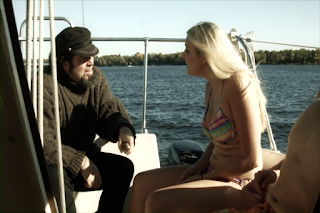 Sharks are all the rage in the world of B-movies lately and RAIDERS OF THE LOST SHARK should cement its place alongside the rest of the Syfy channel and straight to video cheese as a truly terrible piece of filmmaking that manages to find that special balance between being bad and fun. Get some friends together and a case of beer because there are plenty of drinking games to make out of this one.

The Audio & Video
Wild Eye Releasing does a nice job bringing this one to DVD. The image quality looks great with nice definition and sharpness. The anamorphic widescreen transfer has no damage and looks about as good as the digital photography is going to look on DVD. The 2.0 audio sounds good, if a bit quiet at times but that's more to do with how the audio was recorded during the production of the film than with Wild Eye's authoring of the disc. The audio is mostly crisp and clear and free of any distortions. 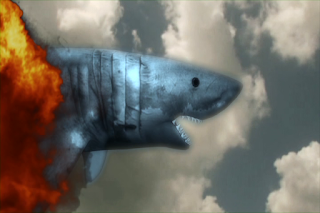 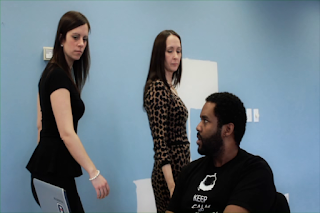 The Bottom Line
This Z-Grade cheesefest is fucking hilarious and if you've found yourself to be a fan of Sharknado or any of the countless similar films you'll want to have a night where RAIDERS OF THE LOST SHARK is included in your viewing.

RAIDERS OF THE LOST SHARK is available HERE
Posted by Celluloid Terror (Seth Poulin) at 5:23 PM

This movie is a steaming turd you should avoid watching or even stepping in.