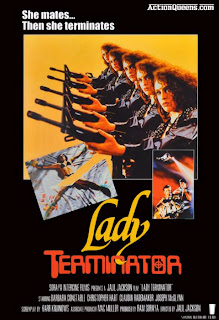 "Sometimes the past should be left to memory, to gather dust in the cupboards of recorded time." These are the first words spoken in LADY TERMINATOR, it is a wonderful thing dear readers, that this film was rescued and not left to memory.

The South Sea Queen is a sex driven witch who is hungry for a man to satisfy her. The only problem is that whenever her and one of her men are getting it on the guy ends up with his dick bitten off by the serpent that lives in her haunted cooter. This happens until she is tricked and a man is able to grab the snake and turns int into a dagger. The South Sea Queen vows to return in 100 years to enact her vengeance on the man's great granddaughter. Skip forward a hundred years and a young lady (excuse me, anthropologist) is doing a thesis on the South Sea Queen. When she finds a book that leads her to the area where the Queen's castle was engulfed by the ocean she goes on a diving trip and is seemingly possessed by another snatch serpent in a scene eerily reminiscent of the tree rape scene from The Evil Dead.

Now possessed by The South Sea Queen the anthropologist (she's not a lady!) is a seemingly invincible witch who has all sorts of nasty things in mind to get her vengeance on the great granddaughter who is a local singing celebrity. The only weakness the Queen has is to an amulet the man who tricked her was able to obtain. The endless shootouts and beatings from the police force do little to slow her down until she is stabbed through the heart with the dagger made from the original pussy python.

Upon hearing that I bought the DVD of LADY TERMINATOR a friend of mine responded with "Hell. Yes. One of my favorite pieces of shit ever!". I don't think there could be a more appropriate response. This movie is a total piece of shit. It makes almost no sense at all. Why does the title screen and opening credits look like they're from two completely different films? Why do the the police throw themselves in front of the Queen knowing their guns don't hurt her? Why does the Queen get the ability to shoot lasers from her eyes at the end? Why does the great granddaughter look to have no Caucasian in her when the man that turned the snake into a dagger (yes I think I finally ran out of puns for it) was white? Who the hell knows, and who the hell cares. This movie is a blast. There is endless sex, and even more violence. The acting is wooden and the writing is laughable. The effects are what you'd expect from a late 80s Indonesian action exploitation flick. But God damn this movie is a blast! There is little I can write to really explain how awesome LADY TERMINATOR is. I'd been hearing for years from various friends about how awesome it is but I was still skeptical. Hell I was skeptical up until this first time viewing. It didn't disappoint.