The Film
By 1971 Hammer had become a huge name in the world of horror and were arguably the most important studio for our beloved genre at the time. They had much success with their Dracula and Frankenstein franchises and launched the career of Christopher Lee to international fame while giving veteran actor Peter Cushing perhaps his most notable roles. TWINS OF EVIL is another great piece of gothic horror from the British film company.

Frieda and Maria (Playboy centerfolds Madeleine and Mary Collinson) are twin girls sent to live in the village of Karnstein with their uncle Gustav Weil (Cushing) after the death of their parents. They find Karnstein is far different from their home of Venice in how uptight conservative and strictly puritanical it is. Weil is the leader of a local witch hunting group called "The Brotherhood" who is well known around the area for hunting down young women and burning them at the stake for their pact with Satan, which they usually have no proof of. Weil is also at odds with Count Karnstein, a sadistic man who secretly practices black magic and seeks the darker pleasures that only the devil can offer. 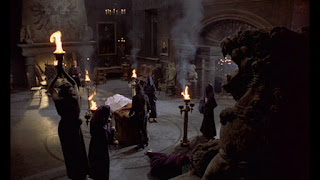 After growing tired of the superstitious, uptight nature of her uncle Frieda pays a visit to the Count and falls prey to him and his vampire ways. Frieda now tries to keep her condition secret from her sister and uncle so she can continue to see her lover and stay free of her uncle's lynch mob. The Count has a plan to switch the girls in order to allow Freida to live freely as her more innocent sister and have Maria burned at the stake. A local musician named Anton who studies the history of superstition uncovers the diabolical plan and gets The Brotherhood on his side to save Maria and take down the vampire lovers.

TWINS OF EVIL was directed by John Hough who is probably best known as director of the classic exploitation film Dirty Mary Crazy Larry. This was only Hough's second feature film before he went on to a very busy career during he 70s and 80s and continuing even to today as a producer. Hough skillfully handles the characters, especially Cushing's Gustav Weil who will do a complete 180 on you and it is totally believable with Hough's direction. Aside from Cushing the acting is all very good, never being too hammy which many genre films of this era can be guilty of. Even our twins who are realistically there as gorgeous eye candy for the most part play their respective roles with grace and play very well off of each other. David Warbeck (Fulci's The Beyond) plays the musician Anton with a great sense of urgency and it works out well.While being rooted in the gothic horror that Hammer is best known for, TWINS OF EVIL also reaches a deeper level with it's work within the witch-hunting area and the obvious questions it raises towards how the church handles certain situations. This is very reminiscent of the excellent Witchfinder General aka The Conqueror Worm. The most surprising thing about this film is how the finale really ramps up the violence and gore factor. Hough really made our lynch mob scene violent and awesome. 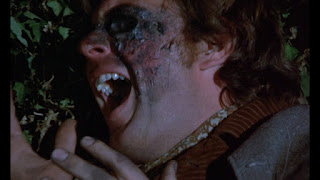 The Video
Synapse Films releases TWINS OF EVIL on Blu-Ray in beautiful 1080p High-Def. The original aspect ration of 1.66:1 is maintained and it looks phenomenal. Skin tones look lively (or... undead? ha!) and natural while the blood reds pop off the screen. The blacks are deep and dark and you can feel the murkiness of the European countryside and the dampness of the Count's castle. Simply an outstanding transfer.

Please note that screen grabs are from the DVD copy of the film. 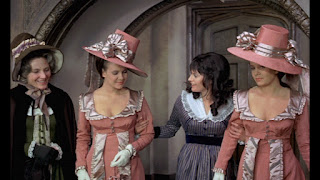 The Audio
The DTS-HD MA 2.0 Mono track is a pleasure to listen to. Dialogue levels never have to compete with Harry Robertson's excellent score. No hissing, crackling or any other noise debris to report. There are English subtitles available. 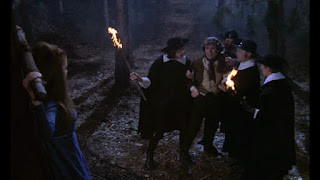 The Extras
The Flesh And The Fury: X-Posing Twins Of Evil - This feature length documentary chronicles the history of Hammer all the way back to Sheridan Le Fanu's story of Carmilla up to the production of  TWINS OF EVIL which owes a certain bit of gratitude to the "original lesbian vampire story". Clocking in only a couple of minutes shorter than the film itself, this is chock full of information and history from historians and cast and crew. We'd be better off if every film released on disc had this sort of supplement.

The Props That Hammer Built: The Kinsey Collection - Author and Hammer historian Wayne Kinsey gives us a tour of his collection of props from various Hammer films, which of course is filled with all sorts of information on the pieces and films they come from. This is a very cool featurette that all of us geeks will enjoy and make us all jealous. 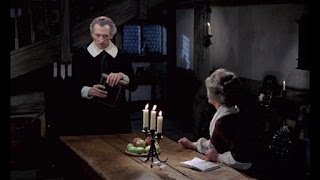 The Bottom Line
A year and a half after I learned of it's planned release I finally get to see the final product. Yes, I've been waiting for TWINS OF EVIL on Blu-Ray since December of 2010 and I have to say that Synapse Films not only made the wait worth it, they blew my expectations out of the water. The documentary alone is worth the price of admission, and it's a special feature! This is a packed release of an expertly restored film and I have no doubt it will be among my favorite releases of 2012.