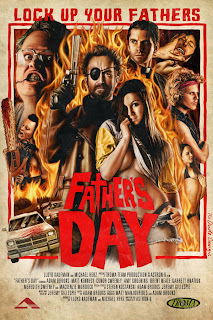 The resurgence of 70s and 80s exploitation inspired films over the last five years since Tarantino and Rodriguez's Grindhouse  has been a mixed bag to say the last. While there have been some very entertaining films there has been an equal amount of crappy films that just have no idea what it is they're try to recreate.  FATHER'S DAY has been a highly anticipated release experiencing delay after delay until the release to Blu-Ray and DVD has finally made it to us.

10 years ago a series of strange murders hit the town (what happens to be Tromaville thanks to Troma's distribution of the film) where fathers were the victim. Not only were they brutally murdered with entrails being ripped out being a popular form of torture among various others but each and every father was anally raped. The man responsible, known only as Fuckman, has left families broken and lives destroyed and now a decade later he's back. Father John is a priest who is sent by his head priest who is on his deathbed to track down Ahab, an eye patch wearing loner who had a run in with Fuckman as a child and spent 10 years in prison for killing him. They are joined by a male teen prostitute named Twink to find out why the violations and murders have started again. Ahab becomes very personally involved in the job again when his little sister, who has now grown up in to a beautiful and sexy stripper, has been abducted by Fuckman. After a cat and mouse chase, Ahab slaughters the madman in a manner that makes the curb stomp scene from American History X look like a fight on the playground.

That should be the end of it, right? Justice has once again been served as Ahab saves the day with his companions and gets the girl. No dear reader, that is in fact not the end of it. And as ridiculously over the top the movie was up to this point, with seemingly endless gore and plenty of gratuitous nudity in a story that makes you giggle like Beavis and Butthead, we are about to throw all logic and coherence out the fucking window. Take what you had: a murderous madman with a penchant for raping the behinds of fathers, a trio of vigilantes and a hot stripper in distress and add in Satanic cults, heaven and hell, Lloyd Kaufman, demonic giants, more strippers, baby smashing and incest. Oh yea, the shit hits the fan (surprisingly not literally) in the third act.

This film was made by Astron-6 a group of 5 Canadian filmmakers who decided to team up under this banner and make these ridiculous films influenced by the sleaze and cheese of old 42nd Street that has become all the rage these days. The technical side of things is what it is- the direction is solid as the team shows they can make a decent movie. The special effects which are on display quite often are nice, with a lot practical effects mixed in with only a handful of CGI. What may be the strongest point of the film is the synth-driven score that adds a level of moodiness to the film that really helps balance out the humor. The writing is the obvious weak point here. While the story is ridiculous enough to work there are moments of dialogue that are just bad. This film could have easily been as atrocious as it was fun. I don't know if Astron-6 gets away with towing the line like this in their other films as this is my first exposure to the group but they were playing it dangerously close to almost having a movie that makes me want to punch myself in the face repeatedly. Instead they made it work, and that is the important part.

Does FATHER'S DAY capture the feel and character of a exploitation film from decades gone by? No. It certainly tries to just like many other films these days that just don't quite seem to get it, but they're among the ones that still ended up making a movie that was just plain fun.