The Australia and New Zealand area were making some fucking crazy and messy horror movies back in the late 80s and early 90s and BODY MELT is right up there with all of Peter Jackson's early offerings. 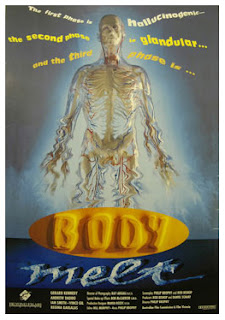 Vimuville is a new trendy health spa that is releasing a line of dietary supplements with the same name. Their test market is a single small town neighborhood on Pebbles Court. They receive free samples of the drink mix and pills in their mailboxes and who can resist trying a free sample? A former test subject at the Vimuville headquarters tries desperately to warn the residents of Pebbles Court but ends up in a car crash and dies at the doorsteps of the soon to be victims he was trying to warn. The police investigating the man's death begin to patch together a trail leading to the headquarters of the new dangerous drug that will causes hallucinations before far more deadly and disgusting side effects such as cellular mutation, elongated tongues, literally melting from the inside out, and various other brightly colored nastiness.

As the police piece together the puzzle more and more residents of Pebbles Court begin taking the supplements and one family even takes a vacation to the new health spa. As the addiction to the pills grows within each character the ooze and gore piles up, even taking over a police station until almost everyone has been effected in some way. It is up to the team of police to try and stop the distribution of these incredibly unhealthy supplements before they reach any more of the public.

BODY MELT will fit right along side Bad Taste and Dead Alive for sure. It is similar in tone with a rapid, fast paced slapstick element and filled with satire and humor. Director Phillip Brophy obviously pulls no punches in his view on the image obsessed society we continue to live in and how dangerous these "cure-all" pills are. The gore is used as a platform to showcase the damage they can do to a person, and while it is incredibly over the top and full of entertainment it certainly brings the viewers attention to the deeper issues at hand. The frantic pace of the cinematography is matched with the soundtrack from Brophy himself (former member experimental electronic group Tsk Tsk Tsk) to add to the feeling that the viewer is on pills themselves. The cast does a good job blending the humor and the drama of the film which really brings the writing to life.

If you're looking for a fun horror film that is extremely sloppy in the gore department look no farther than BODY MELT.