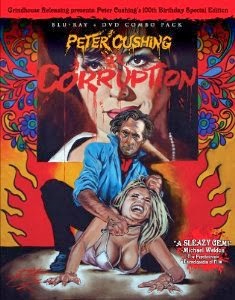 The Film
Peter Cushing stars as John Rowan, a well respected surgeon who is dating a gorgeous fashion model named Lynn (Sue Lloyd). At one of Lynn's hip parties, John gets into a fight with Lynn's photographer resulting in a hot lamp burning Lynn's face badly. Desperate for a way to restore his love's face, life and career, John begins researching theories and techniques on plastic surgery and tissue regeneration. John discovers a method the ancient Egyptians used that requires a new pituitary gland for the patient. After getting one from a  body in the morgue and doing his procedure, Lynn's face looks good as new... for a short while.

It becomes apparent to John that the gland must come from a living patient as it will be fresher and more able to do its job. Lynn pressures John into acquiring the gland she needs to regain her beauty. Of course this means John has to find women that can't be tracked as he has to murder them to get what he needs, and as the pressure on him from his lover mounts Cushing begins to break down. 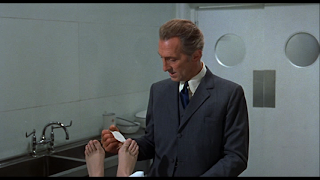 CORRUPTION could be viewed as a sleazier take on Eyes Without A Face and nobody would argue with you. It certainly is similar, but it is a different beast, in only for the fact that we get to see The Gentleman Of Horror himself, turn in to a crazed maniac that reminded me of a skinner, and less greasy version of Frank Zito from 1980's Maniac, played brilliantly by Joe Spinell. Of course this film was made over a decade earlier, but after its initial run it wasn't often available and was never seen by this reviewer until today.

The film is better than you may expect from a short description as "a sleazier Eyes Without A Face". The performances are great, of course that isn't news for Cushing but Sue Lloyd is fantastic as the narcissistic lover who feels she can't live without her beauty and the supporting roles of Jan Waters as a prostitute, and Noel Trevarthen as Cushing's fellow doctor and fiancee to Lynn's sister. There isn't a bad performance in the bunch and the direction is also strong. Look no farther than the laser beam fight at the end of the film or the fish-eye photography when Cushing gets down and dirty. 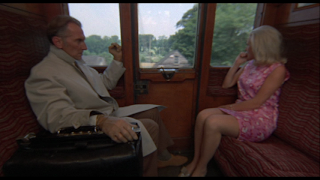 The Audio & Video
For their second Blu-ray release Grindhouse Releasing brings CORRUPTION to us with a new 2k restoration in a gorgeous anamorphic widescreen print that is free of any digital hiccups or missteps. There are no signs of edge enhancement, DNR, or unceseary tampering with the picture. Skin tones are natural, colors are balanced without any hot spots and detail level on textures and skin are strong. I love the way this disc look. The audio is also fantastic, with a perfectly clean track. There are no pops, hisses or distortions. While CORRUPTION is light on sound effects that will give your sound system a workout, you'll be able to enojoy the dialogue and score without any worry about poor mixing.

Please note: Images taken from DVD copy of the film 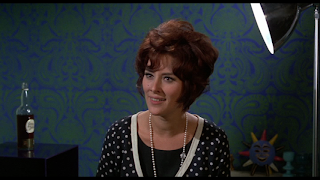 The Bottom Line
This is a great piece of horror and Cushing that has been lovingly rescued and re-introduced to the world by Grindhouse Releasing and I couldn't thank them more. Highly recommended.

Never heard of it. Will add it to my watch list!

The trailer for this is fantastic. I definitely need to check it out.

Both of you guys will enjoy the hell out of it