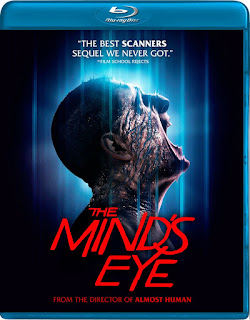 The Film
Zack and Rachel are patients in a research facility testing psychokinetic abilities but eventually find themselves as prisoners to Dr. Slovak who is harvesting their abilitiles to become more powerful than anyone. Zack and Rachel break out of the facility but Slovak will stop at nothing to hunt them down and drain them of their powers which leads to a brutal showdown.

It's immediately obvious that writer/director Joe Begos is a fan of David Cronenberg as THE MIND'S EYE features some heavy influence from some of the Canadian master of body horror's films including most notably Scanners. I'm fine with this because I love David Cronenberg and if a young up and coming director is influenced by him then all I can say is he could pick far worse people to influence him. The film starts rather abruptly as we're thrown into the story without much build but it's simple enough to settle in easily and not need any questions answered. It does leave us with minimal time to really get to know our characters which ends up being my biggest disappointment with THE MIND'S EYE - I wanted to know more about Zack and Rachel's relationship and history together and more about Dr. Slovak and his deeper intentions.

The film is still a success despite me wanting more background. John Speredakos proves to be perfectly capable of portraying a maniacal, power hungry mad doctor and is quite unlikable. His performance gets better as the movie goes on. Graham Skipper is a fantastic protagonist and we're given just enough of a glimpse into his past later on in the film to really latch on to him and pull for him in his fight against Slovak. Skipper does a really good job hardening up against his enemy but remaining likable. And rounding out the three leads is Lauren Ashley Carter who is quickly becoming one of my favorite young actresses. I first saw her in The Woman but it was Jug Face that I found her to be truly great for the first time. Her performance in THE MIND'S EYE is just another positive mark on her resume as she has strong chemistry with Graham Skipper. Carter is strong but damaged and in between a rock and hard place and nails it. Sadly we didn't get to see more of her.

Joe Begos takes advantage of the great performance she got from his cast and created a film that has great art design and photography. THE MIND'S EYE is simply a good looking movie. It's also filled with excellent special effects that rival any of Cronenberg's nastiest and grossest moments including what might be a bit of an homage to the infamous head exploding scene from Scanners. The cherry on top of the performances and direction was the score from Steve Moore who is one of the kings of modern synthrock. When I saw Moore's name in the credits I knew we were in for some excellent synth based music and I wasn't let down. Whether it was setting the mood or ramping up the tension and horror Moore's score is an excellent addition to the film.

THE MIND'S EYE isn't perfect and a bigger budget probably would have allowed for a picture that was bigger in scope and perhaps gave more time for the background of Zack and Rachel but as it is Joe Begos has taken a big step forward from his 2013 feature Almost Human which was decent but THE MIND'S EYE fully has my attention set on Begos' future to see what else he can create as he grows.

The Audio & Video
RLJ Entertainment deliver THE MIND'S EYE to audiences on a stunning Blu-ray release. The picture quality really delivers the film's incredibly colorful lighting design with vibrant hues of red and blue flooding the sets at times. Skin tones look natural without any signs of waxiness and black levels are deep. The picture is clean and sharp and just looks fantastic while the audio is crisp and clear with a DTS-HD Master Audio 5.1 mix. Steve Moore's score comes through beautifully while the film's sound design that gets interesting at times sounds powerful with steady levels.

The Bottom Line
THE MIND'S EYE falls short of being a modern day classic but it still has a lot to offer. I was caught off guard with how good it is from the solid acting, to incredible effects and a brilliant score from Steve Moore. Seek this one out!

THE MIND'S EYE is available HERE