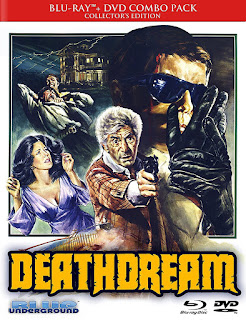 The Film
There's no perfect time to write a review on this film. It is a horror film centered firmly on the horrors of war and what the surviving participants bring back with them. Nobody, on any side, has ever returned from war the same as they departed. Bob Clark very clearly and eloquently describes that in DEATHDREAM.  Earlier titles included The Veteran which is a bit too on the nose for the film's own good but it would certainly work in this story of a soldier returned from the horrors of the Vietnam War, which is something nobody had ever been exposed to before.

Shortly after receiving news of Andy's death in Vietnam, Andy's family is startled by his surprised return home. Thrilled by their son's return and the military's mistake the family writes off his change in demeanor to the casualties of war. Andy who was a bright, energetic and engaging youth has returned as a quiet, reserved and very irritable verteran of war, still coddled, and rightfully so, by his mother. His reintegration into society is very slow and his father is his biggest critic, citing his own time spent in the service as a weakness in Andy, but reacting mostly to his aversion to the family pets that seem to not approve of his new attitude. Andy's sister has set up a date with his old flame to hopefully bring back the old Andy but things go further south as the damaged Andy can no longer pretend to be his old self. 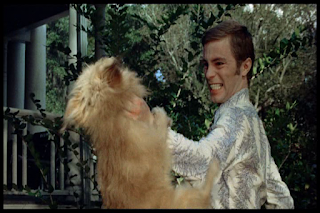 DEATHDREAM is a minimalistic yet totally engulfing horror film. And it is heart wrenching. There is a layer of social commentary within this film that rings as startingly and profoundly true now as it did in 1974 but it never becomes overly intrusive to the enjoyment of the film. It's obvious that Bob Clark understood how to get a message across within a package that mass audiences would appreciate and enjoy on a commercial level. Richard Backus didn't need to turn in an Oscar winning performance to turn this film into an absolute winner but he did manage a great performance and made DEATHDREAM a time tested classic that far outlives the confines of the Vietnam War. Lynn Carlin perfectly exemplifies the grief of a somber and sorrowful mother that will do anything to protect her son and finally his legacy. Andy isn't a bad person and you can't really blame him for his actions as the movie rolls on and his mother loves him and will put herself in the crosshairs for him. He's not well, and his actions are awful but Andy did not return home as the same Andy that left. It's an obvious commentary that sadly couldn't and wouldn't change the world and many war torn vets were left in positions that were at best unsavory. 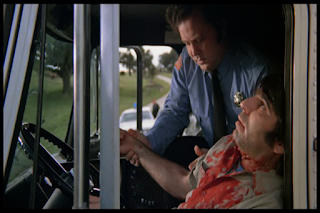 War is hell and it's unfair to expect a soldier of war to return the same as he left. If anything is clear in DEATHDREAM it is that. DEATHDREAM is filled with enough horror movie moments to make it a classic and a classic it is, through and through. Alan Ormsby's (With a young Tom Savini serving as his assistant) simple special effects are well done and totally believable and add to the horrific nature of this film. There's a level of visual satisfaction along with the emotional impact of this film that has been underrated and overlooked for too long. It's a damn fine horror film that I can't speak of highly enough.

The Audio & Video
Blue Underground has been quietly releasing top notch Blu-ray after top notch Blu-ray and this release of DEATHDREAM is another example of greatness. The disc features a gorgeous 16x9 anamorphic widescreen transfer with a healthy and natural grain structure that reminds you that you're watching a movie shot on film. Without being overly grainy, the film retains that look that digital photography simply cannot reproduce. Colors are warm and natural while skin tones remain healthy and fleshy. Black levels are deep with no compression or blocking issues. Detail level is strong especially in close up shots on faces and textures. The audio features a DTS-HDMA 1.0 Mono mix which keeps the film's original audio mix but presents it in the finest available quality. It's simple but beautifully crisp and clear with no background noise or distorted damage. The score and dialogue mix perfectly and never jocky for position over the other.

Please note: The screen grabs shown in this review are from the DVD copy of the film and in no way reflect the new HD transfer.

The Extras
This release is absolutely stacked with special features which include: 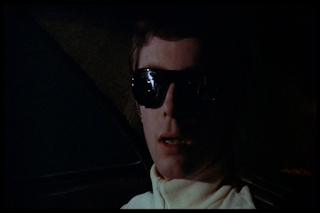 The Bottom Line
Even if this release was barebones and didn't feature any special features I would still say this is one of the must own releases of the year because the film is that damn good but since it is packed with special features and sports a fantastic A/V presentation this release of DEATHDREAM is essential viewing.