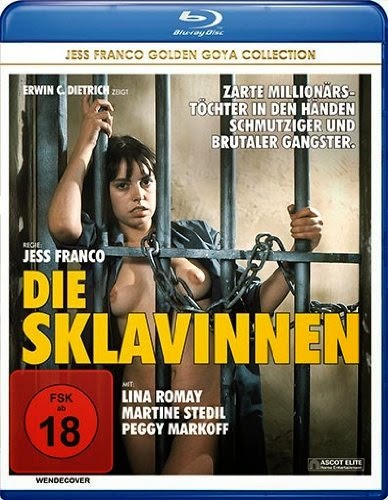 The Film
A father and his right hand man pay the five million dollar ransom for the return of his kidnapped daughter. When his daughter isn't returned he has the owner of a whore house kidnapped as they believe she knows the whereabouts of his daughter who may have been brainwashed.

A simple plot leads to a movie filled with tons of beautiful women, sex and violence. Also known as Die Sklavinnen (The Slaves), SWEDISH NYMPHO SLAVES is a fine example of Franco's ability to create entertaining Euro-trash. Lina Romay is great in the lead as the whorehouse owner and she looks as fine as ever. The sets and cinematography are among the best of the time for Franco and I'd go far enough to call this one of his best films of the mid to late 1970s.

The Audio & Video
Ascot Elite lives up to their name with another elite Blu-ray presentation of Jess Franco's films. SWEDISH NYMPHO SLAVES has great detail, natrual skin tones and excellent color representation. The picture is sharp and clean. The DTS-HD 5.1 German audio track is crisp and clear with no background noise. The mix is spot on and the English subs are perfect.

The Bottom Line
Sexploitation fans will enjoy this one as Franco brings a solid story, and plenty of the juicy stuff to the table and makes a fun piece of sleaze!