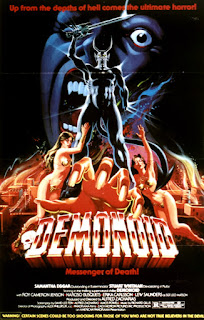 A trio of first time viewings for the day and none of them were anything special unfortunately. Leading off was Demonoid, a movie that's best scene was the opening one as an old Satanic cult chops off the left hand of its victim and offers it up to Satan. Flash forward a few hundred years to present day and the hand is unearthed in a mine and begins to possess various people who flip between acting like assholes on a killing spree and trying to chop their left hand off to relieve them of the possession. It was passable as it is but had it run any longer (and it has a longer cut) it would have started to become a chore. 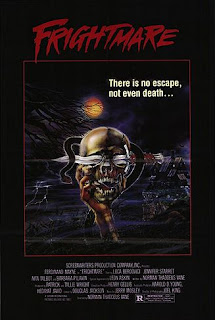 The best movie of the day was Frightmare aka The Horror Star, the story of a legendary horror actor who was full of himself and has recently passed away when a group of fans steal his corpse and party with it until he seeks and gets his revenge. This one was better but the main star desperately wants to be Christopher Lee and can't pull it off. He isn't bad in his own right and would have been better had he toned down the impression of Lee. An appearance from Jeffrey Combs never hurts and this one really isn't too bad at all. 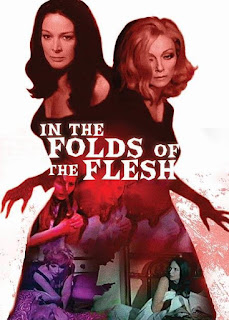 Last up was my first giallo of the month, of which there will be several more. In The Folds Of The Flesh is a title I'd been curious about for several years and finally took the chance to watch my DVD. The mix of incest, murder, Nazi death camps, pet vultures, psychosis, more incest, psychadelic camera work and trippy editing along with a touch of shitty 1920s slapstick comedy sounding music from time to time only begin to sum up what you see on the screen. And what you see on the screen is the best part of the film because the story is a mishmash of bullshit and forced ideas that simply don't add up. This is a film that tries to force the idea that 1+1=3 on you. Not a good film but it's not a total waste of time as I said the visuals of it carry it to at least be engaging.