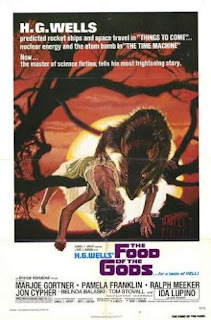 I have always enjoyed nature's revenge type horror films but one that had escaped me seeing it for a long time was The Food Of The Gods. This film directed by Bert I. Gordon is an adaptation of a H. G. Wells story and is a wildly entertaining 70s B-movie. Featuring giant rats, giant wasps, giant worms and even a giant chicken, this fight for survival on a sparsely inhabited island isn't going to be easy for our group of country bumpkins, scientists and stranded vacationers. At least if they kill the chicken they'll have a few weeks worth of delicious dinners. The effects in this are questionable and extremely dated but it only adds to the charm and campiness. 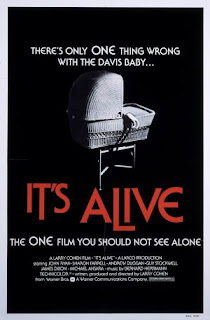 I decided to make my way through Larry Cohen's It's Alive trilogy next. I have previously seen the first film and admittedly wasn't too impressed with it. It had been quite a few years however so I decided to revisit that one to start off with. The movie about a couple that give birth to a dangerous and deformed baby who murders anyone in his way actually features very little murderous baby action and focuses more on the father and his struggle to hold together his marriage and family with their older son and whether he can emotionally distance himself from this rampaging infant who local authorities are trying to capture. The acting is good, the score is good and the effects are good. The only thing holding this back for me is that there are stretches that could have been broken up with a bit more excitement from the baby. 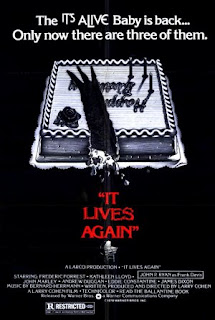 The second film, It Lives Again, starts out with great promise. The first 30 minutes or so set up the story, and bring back our main character from the first film as he visits with families suspected of possibly having the chance at birthing a monster baby which the government has set out to eradicate as it has become a widespread problem. He's a voice fighting for the families right to have the child and love it. Unfortunately right when the movie should take off and hit the next gear in the story and become something great it veers straight into a brick wall and comes to a screeching halt. It immediately starts to drag on at this point and never recovers. It's not a bad film but it does end up being a missed opportunity to make a bigger and better version of the first. 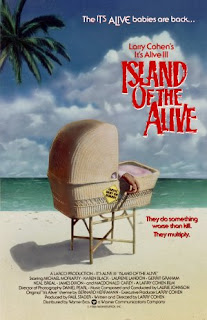 Lastly is It's Alive 3: Island Of The Alive - At this point I think the best option for the series would have been to take the series and ram it head first into a cheese factory, especially for the fact that this film wasn't made until 1986, 13 years after the original and 8 after its immediate predecessor. The battle for the right for these babies to live is a courtroom topic and the judge rules that they be sent to a deserted island to live out their years safely removed from society. There are a few groups that don't like that idea and take their ideas and their guns to the island to exterminate them and meet nasty and untimely deaths as these creatures have become full grown in just a few years time and can reproduce. Eventually taking control of a boat and reaching landfall this would have been the perfect time for Larry Cohen to totally unleash a gory monster movie romp on the audience. The scene where the monsters make landfall is extremely reminiscent of the carnival attack scene in Humanoids From The Deep. Unfortunately the movie restrains itself and we're left with a movie with a very confused identity. I enjoyed the film and think it rivals the first movie for best in the series but this could have been a classic slice of 80s cheese.