Just a couple of movies for this day, starting with the first time viewing of Stuart Gordon's Daughter Of Darkness. This 1990 made-for-tv movies stars Mia Sara of Ferris Bueller's Day Off fame and Anthony Perkins and follows her as she head's to Romania after the recent death of her mother to find out about the history of her father which leads her down a dark path into vampire lure. I held out hope for this one because it was directed by Stuart Gordon but I was afraid it was going to be entirely forgettable. Well it isn't a lost classic but it is a passable vampire film with good performances that is more graphic in terms of both violence and nudity than I thought it could ever be. Go ahead and track it down if you're a fan of Gordon's. 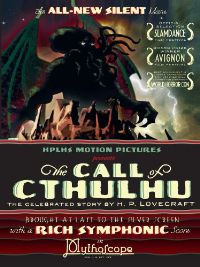 I've had Lovecraft on my mind quite a bit this passed week and I think I might be on a mini Lovecraft kick this week and to start it off there was no better way than with 2005's The Call Of Cthulhu. This is my 3rd viewing of the movie and it remains an immensely entertaining and great feat of indie filmmaking. The movie is filmed in the silent style of the 1920s that the story was written in and it works really well. There's a few really impressive set pieces and an amazing stop motion animation sequence with Cthulhu. If you're a Lovecraft fan you need to see this one.

Call of Cthulhu is a modern masterpiece