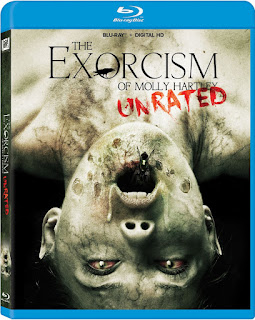 The Film
On her 18th birthday Molly Hartley became possessed by a demon. After seemingly overcoming her literal demons Molly has led a normal and successful life. After graduating college she has become a partner in her company the demons have returned as she is charged with murdering two of her friends  on the night of her 24th birthday and has been confined to a mental hospital where a defrocked priest hopes to redeem himself and save the young woman.

Seven years after the original film that failed to impress me at all we're given a sequel starring Sarah Lind and Devon Sawa as the priest looking for redemption. There's little chance for the cast to shine as the screenplay is as basic as they come. Every exorcism themed horror movie cliche is shown, from cursing religious themed obscenities, to vomiting (usually green as it is here), special effects makeup to show that, yes, the girl is indeed possessed and so on.

And with the cliches comes absolutely none of the suspense or sheer urgency in trying to cure the victim. The film has no heart to it. It's a paint by numbers picture with every label neatly marked. There's nothing to see here unless you feel like you need to see every exorcism themed horror film and I assure you you don't.

The Audio & Video
20th Century Fox delivers a very attractive 1080p HD presentation of the film in a 1.78:1 anamorphic widescreen transfer. Colors are vibrant and lively while flesh tones are naturally fleshy without any waxiness. Textures and surfaces show great detail and there's no issues with black levels blocking up. The English DTS-HD master audio is handled in a 5.1 surround mix that is well done. Levels are steady and feature a nice mix between dialogue and score. The sound quality is crystal clear and quite crisp with no background noise or damage.

The Bottom Line
There's not an awful lot that hasn't already been done in exorcism movies but THE EXORCISM OF MOLLY HARTLEY doesn't even try.

THE EXORCISM OF MOLLY HARTLEY is available HERE
Posted by Celluloid Terror (Seth Poulin) at 11:20 PM