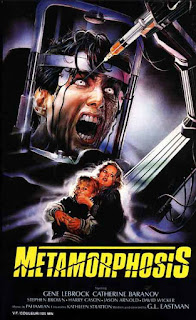 Three films for the day and things started off with a double feature of 1990 Italian films I'd never seen before courtesy of the new Blu-ray from Scream Factory. First up was George Eastman film Metamorphosis. I was excited to see this one based on the artwork and that it was directed by Eastman who I love as an actor. Unfortunately the film doesn't take advantage of the potential it had. There's a few bizarre moments that could have made this film something special if the film did more with them but they end up showing up towards the end of the film and we get but a fleeting glimpse of how crazy the movie, or a sequel, could have been.

The 2nd half of the double feature comes from director Claudio Fragasso. Oh, that name doesn't ring a bell? Well maybe his American pseudonym, Drake Floyd, does. No? Okay, well he directed Troll 2. Yeah, now you get it! Beyond Darkness came shortly before Troll 2 but it certainly has a similar feel at times and even co-stars Joshua from Troll 2. This one is a weird mashup of Lucio Fucli's The Beyond, Troll 2 and The Exorcist without being as graphic as The Beyond or quite as ridiculously campy as Troll 2. It has a pretty decent atmosphere and some simple but effective effects work and set pieces. It is far from perfect but I enjoyed this mashup and found it to be an entertaining time. 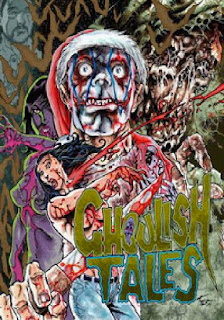 Finally was Ghoulish Tales, a very low budget independent horror anthology from 2014 filled with gore and nudity. That's really all you need to know. It's a splatter film with a shit ton of girls getting naked. I was surprised that the intentional cheesy writing didn't annoy me as movies of this tone often do but the acting is competent and the stories range from a masked lunatic to vampires and we get everything from castration and disembowelment to full frontal nudity. This would go perfect with a night full of beers.