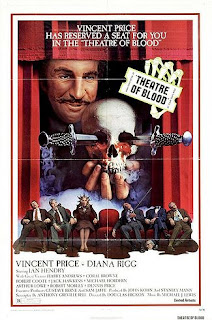 Theatre Of Blood started out day 3 and I can already see this being one of my favorite new viewings for the month. Vincent Price may have never given a better performance than he does here and it's incredibly well written, paced and staged. Beautiful set design of dilapidated and burned out theaters, fancy apartments and great costuming and make up work. There's an irony about the film as Price stars as a vengeful thespian taking out the critics that he thinks ruined his life and while he may never have gone out and murdered a critic he certainly knew of their opinion of his work in horror films and I think a single line involving the term "ham sandwich" sums up those opinions. 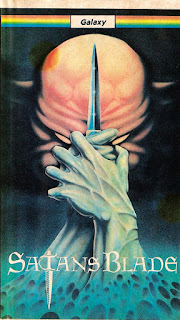 This one confused me... I knew I was in for a low budget slasher film but I expected a supernatural element that never showed up. A very brief and vague folklore set up the possibility for it but Satan's Blade never gets out of generic slasher territory and though it kept my attention just fine it was pretty "blah". Something about it didn't let me totally hate it however so the movie ended up being as wishy washy as this brief review of it. 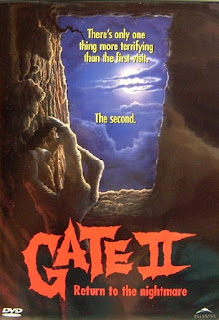 I expected awful things from this one based on what I have heard over the years but the fact that it's a sequel to a movie I love deeply, I had to hold out hope. The Gate 2 takes place two years after the first film and stars Terry, the heavy metal loving best friend from the original who, along with a few asshole trouble makers from school, try to use the demonology for their own personal gain but it comes back to haunt them as it once again opens the path between realms. Unfortunately it's glaringly obvious that the budget from the first film was far above that of the sequel but director Tibor Takacs did the best he could and managed to create a few great scenes including a "final boss" type battle in the demon world. It's cheesy and takes on a strong B-movie look that the first didn't have but I enjoyed it quite a bit more than expected.