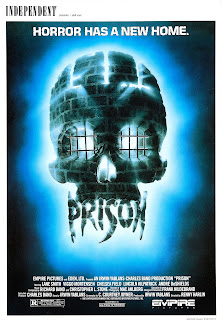 Before he was a king named Aragorn in The Lord Of The Rings and before becoming one of David Cronenberg's best go-to actors Viggo Mortensen was a young inmate in Wyoming State Penitentiary named Burke, one of 300 inmates being transferred to the recently reopened prison a couple decades after it was shut down. The prison is in complete disrepair with flooded levels, electrical problems and a decaying interior. Burke rooms with an elderly inmate named Cresus who has been in the system longer than Burke has been alive. The nasty Warden Eaton Sharpe (Lane Smith) assigns the inmates jobs to help fix up the prison and Burke is assigned to knock down a false concrete wall to allow access to the execution chamber. As soon as the wall is breached a powerful force of light blasts through and begins to wreak havoc on everyone inside the walls of the prison. 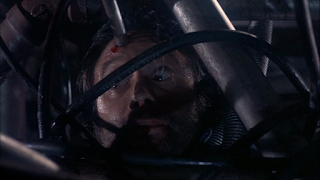 Katherine Walker is a state worker in charge of overseeing the day to day operations at the prison and making any necessary reports. As she investigates the Warden's shady operations, and all of the strange and violent deaths that are starting to pile up she discovers that one of the inmates helped the Warden cover up a murder decades earlier and pinned the blame on a fellow inmate named Charlie Forsythe, who bares a striking resemblance to Burke. It quickly becomes apparent that the killings will not cease until the spirit of Forsythe gets his revenge on the man responsible for his death.

PRISON has been overlooked for a long time, probably due to its lack of DVD release in the US until very recently. Director Renny Harlin (Nightmare On Elm Street 4, Die Hard 2) gets better performances out his cast, which includes supporting roles from Tommy "Tiny" Lister and Kane Hodder, than I could have expected. Mortensen plays his character with a single note but it works well and Lane Smith is great as Warden Sharpe. The writing is a mess with the Forsythe/Burke angle though. Is Burke the reincarnated spirit of Forsythe? If he is, why wouldn't he just take out the Warden with one of his multiple opportunities. Was he the son or some sort of relative to Forsythe and has strong genes tied with him, explaining the resemblance? I don't know. It's never explained and for a moment that is supposed to drop us on our heads and be the twist to the movie it is handled poorly. 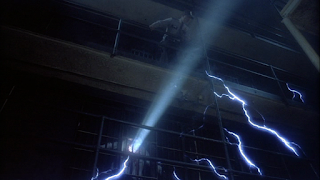 Luckily it is an unnecessary twist to begin with. Whether Burke is or isn't Forsythe reincarnated or whether he has anything to do at all with him really doesn't matter. He's a likable guy that you can relate to and you want him to survive. The kills are simply brutal and filled with blood and gore. The special effects were very effective for the gore pieces. The film was shot on location in an old Wyoming prison and it lends to an authentic feeling for the film that manages to be ridiculously entertaining despite some glaring flaws.