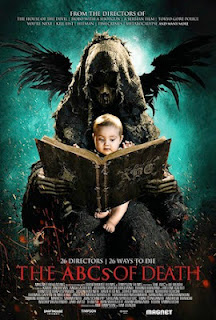 Anthologies have long been a part of horror and there have been many fantastic films comprised of multiple short films under a single banner. Creepshow, Vault Of Horror, Tales From The Crypt, Tales That Witness Madness, the list goes on and on. During the 90s the horror anthology seemed to fall out of vogue but over the past several years they seem to be regaining their popularity.

THE ABCs OF DEATH is a 26 part horror film with a different director being assigned to a specific letter of the alphabet to represent different ways to die. Each segment runs anywhere from less than two minutes to several minutes. Directors include Ti West, Angela Bettis, Jason Eisener, and Xavier Gens among other contemporary horror film makers working on just a $5,000 budget for each segment. The segments range from the very gory XXL, to the experimental ORGASM and the animated TOILET and KLUTZ. Segments such as GRAVITY are extremely minimal while VAGITUS looks like it spent several times its budget.

The project seemed like it would be a fun romp filled with ridiculous horror but it simply is not. The best segments barely get a rise of positive emotion out of the viewer and the worst seem to drag on far beyond their short runtime. Many of the directors tried to cram too much of an idea into their allotted time but when the idea wasn't good to begin with it turns into really stinky garbage. There is already a sequel in the works so maybe that one will be better but THE ABCs OF DEATH is a waste of time.

I don't think am even going to waste my time on this film.