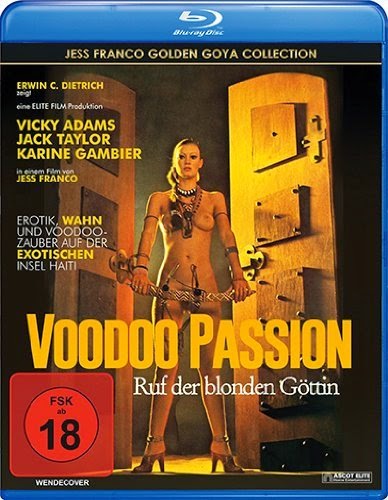 The Film
Oh, Jess Franco. I really have no idea what to make of you. For every film you made that is at the very least entertaining, you make crap that is an absolute chore to sit through despite always being filled with some sort of exploitative fare (more often than not it is copious amounts of naked women). While I was hoping VOODOO PASSION would be a fun, sex filled, horror film example of the former, it ends up being a glaring example of the latter.

Upon arriving in Haiti to live with her husband Jack, Susan is introduced to Jack's sister Olga, a nympho who likes to push the boundaries of taboo, and their lesbian housekeeper. Susan expresses an interest in learning about the local Voodoo culture to Jack and soon after begins having nightmares about Voodoo ceremonies, murder and sexual rituals. After 80 minutes or so a really half-assed attempt to throw together a conspiracy against Susan involving Jack and his partners is revealed by Olga who helps Susan along with the local Voodoo community.

The only reason to watch this is for the endless nudity from just about everyone involved. The beautiful women are rarely dressed and even when they have something on it usually exposes boobs or bush or both. Hell, the only reason this film has anything to do with Voodoo, as far as I can gather, is so Jess Franco could incorporate shots of beautiful dark skinned people baring it all. VOODOO PASSION could have easily had a few different plot details and the there would be no need for Voodoo at all.  Really, this film isn't good at all. If you're a Franco completist or really want to see an underwhelming sexploitation film, you can give it a shot.

The Audio & Video
At least the A/V is good. Ascot Elite has proven to be a top notch company with their Jess Franco Golden Goya releases. VOODOO PASSION looks very good overall. There are a couple instances of DNR but for the majority of the film has a very natural look with great detail and color. The only way to watch this in an English friendly manner is with the DTS-HD 5.1 English track. It sounds great. There's no background noise or hiccups in the audio.

The Extras
Trailers and a stills gallery are included.

The Bottom Line
This is far from Jess Franco's best work and despite its fantastic looking and sounding disc I can only recommend this film to Franco super fans.