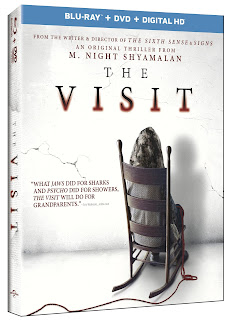 The Film
Family drama and issues is something everyone can relate to. Every family goes through fights and has differences that lead to big blow ups. Sometimes those spats burn bridges and the family splits and it takes children to bring the family back together. Such is the story of THE VISIT in which a couple of adolescents meet their grandparents for the first time after a long rift between formed with their mother. A week long visit to the country home is going to let the kids meet their family, learn of their lineage and maybe bring the family back together. The visit to their pap pap and nana doesn't go exactly as they hoped when they find them to be quite the odd, eccentric and downright scary duo.

I wasn't sure what to expect out of THE VISIT from the marketing campaign for the film's theatrical run but I got vibe similar to Hansel and Gretel and the house made of candy. That was enough to at least get me a little bit interested. Now that I've seen it I still see small bits and pieces that hearken back to the old fairy tale but THE VISIT has a strange tone of its own, one that isn't quite sure what it wants to be. Part horror film, part comedy, and it comes together as a bit of a thriller, I'll call it a horror film. It's very tame in terms of any graphic imagery with only one real moment showing anything nasty but it has some moments I found incredibly unsettling and uncomfortable all dealing with creepy old folks. If that sort of thing can make you squirm in your seat and that is weird old people being creepy as hell, then THE VISIT is worth a visit. 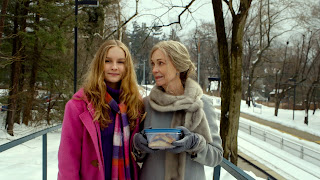 Unfortunately there's a couple of gaping plot holes that don't let this film exist in any sort of real world. The first and most important deals with the signature M. Night Shyamalan twist (you knew there had to be one) so be warned *SPOILER ALERT* It's incredibly unrealistic that the grandparents would look up the family on the internet and contact them to set up this trip and the children's mother wouldn't have ever shown them a picture of their grandparents so the kids wouldn't have known that the people they're staying with are not their real grandparents. Certainly she would have sat down and shown them the people they'd be getting picked up from their train ride by and who they'd stay a week with. *END SPOILER*

The other plot hole deals with the fact that despite this house has no cell phone reception and is essentially in a dark zone for that sort of thing the kids have perfect Skype capability to chat with their mom. There's not a single instance of pixelation or buffering or anything of the sort. I was able to look passed this one and it didn't bother me too much, certainly not as first as the first spoiler plot hole I mention above but it needed to be mentioned.

Acting is good from the young ones to the elders with their endlessly strange mannerisms. Shyamalan's direction is good which has rarely been a problem with the divisive filmmaker. He creates a nice looking film inside of an amateur documentary form. He uses enough different locations in and around the farm house that the short time spent in town is enough of a change of scenery and it never feels stale. As is usually the case with the shortcomings of a M. Night Shyamalan film, it lies in the script. Aside from the aforementioned plot holes there's some really weak and down right embarrassing attempts at pop culture relevancy. I can almost imagine Shyamalan reading the final draft of the script and saying to himself "I'm hip, I'm with it".

THE VISIT is like surviving swimming lessons without actually learning to swim. Yeah, you survived but it wasn't a true success. It was a decent time. And that's how I sum up THE VISIT - it's decent.

The Audio & Video
Universal Home Video delivers a stunning Blu-ray presentation as you'd expect from a new major motion picture. Detail level is high from wood grains to surface textures while colors are natural and lifelike. Whites are crisp without burning too hot and black levels are deep and inky. The English DTS-HD master audio is mixed perfectly and crystal clear. There's no signs of damage or background noise. The dialogue and secondary sounds are complimentary and never have to fight for the audience's attention. 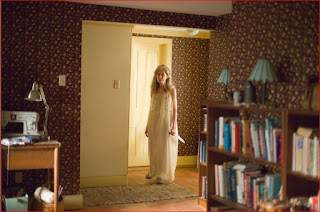 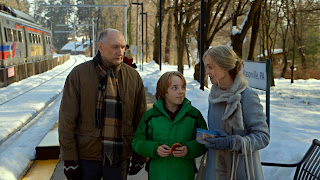 The Bottom Line
There's a definite market for THE VISIT and it found it during it's theatrical run as it was a big commercial success. The film itself isn't as big of a success but I didn't hate it. It was enjoyable enough for an evening of sitting on your ass with watching old people be weird.

THE VISIT is available HERE  and enter our giveaway for a copy of the Blu-ray HERE
Posted by Celluloid Terror (Seth Poulin) at 4:15 PM