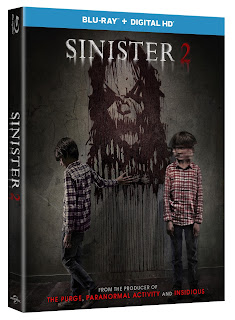 The Film
Bughuul is back in this sequel to the 2012 hit film that featured a demon that had a fetish for forcing mass murder on a family while filming it on an 8mm camera. This time he focuses his attention on a pair of boys who have escaped their abusive father with their mother and are haunted by a group of ghost kids who try to fulfill the family's destiny with another one of the 8mm murder reels.

SINISTER 2 takes perhaps the most interesting part of the first film, the murder films, and shoves them down our throats like dicks in a gang bang. It gets to the point where you find yourself counting the number of films for entertainment because there is nothing else worth while on display and of course too much becomes too much too soon but at least they solved the plot hole that these silent films all had original scores in the first film as the films are synced up to a record player which is probably the most thought or effort put into any aspect of the film. 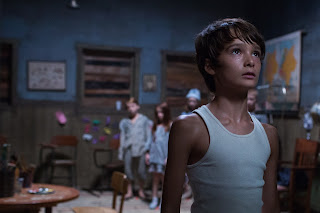 The film is competently made from a directing standpoint and the performances are passable but with a script so dreadful nobody will care. The characters are cookie cutter and make cliche decisions. There's sequences that simply don't add up, such as one of the brothers getting run over with an SUV at a violent speed and shaking it off in seconds but by the point that happens there's so many plot holes that who cares about one more.

SINISTER 2 plays out like the lamest Children Of The Corn sequel you could imagine, complete with children hiding in the corn. It takes the most interesting parts of the first film and turns them into the only moments with any real thought put into them but rendering them worthless at the same time. It is a completely phoned in and thoughtless piece of crap.

Rutabaga rutabaga save me rutabaga!

The Audio & Video
Universal delivers a stunning Blu-ray for the film. The English DTS-HD Master Audio 5.1 surround mix is brilliant featuring a crystal clear mix across all channels. There's no background noise and no annoyances. The mix pounds through when it wants to and features a delicate mix when it needs to. The 2.40:1 anamorphic widescreen transfer is gorgeous with inky black levels that have no sign of compression issues. Colors are natural with highly detailed surface detail. There's no waxiness to skin tones which appear fleshy and healthy. 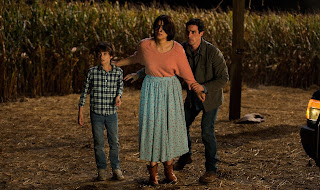 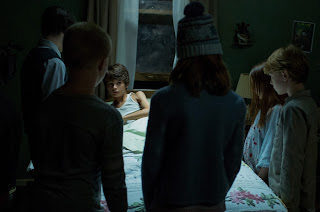 The Bottom Line
The movie is an absolute waste of time even for fans of the first. If they're trying to make a franchise out of SINISTER than they're going about it the wrong way. Skip this mess.

Posted by Celluloid Terror (Seth Poulin) at 10:33 AM