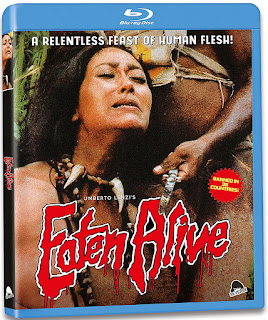 The Film
Sheila (Janet Agren- City Of The Living Dead) is looking for her sister who went missing in the jungles of south east Asia. She joins up with a rough around the edges guide named Mark (Robert Kerman- Cannibal Holocaust) and they venture deep into the jungle to find her sister Diana. They encounter deadly animals, local cannibal tribes and a religious cult controlled by Jonas (Ivan Rassimov- Spasmo, The Man From Deep River) who leads a physically and sexually charged assault on his followers for any transgression. Sheila and Mark use the aid of Mowara, a follower tired of Jonas' ways in an attempt to rescue Sheila and try to get escape the dangers of Jonas and the cannibal tribesman.

Umberto Lenzi started the Italian cannibal genre with 1972's The Man From Deep River which starred Ivan Rassimov and Me Me Lai who both appear in important roles in this film. While the genre wasn't immediately popularized despite that film's large financial success there was plenty more  to come from both the genre and Lenzi and EATEN ALIVE aka Mangiati Vivi! combines the much criticized genre with real life tragedy as EATEN ALIVE could be simply summarized as the Jonestown Massacre meets Cannibal Holocaust. Ivan Rassimov shines as he so often did as the film's lead antagonist, a religious fanatic named Jonas building a devout legion of followers deep in the jungle. It was less than two years after the Reverend Jim Jones lead over 900 followers to drink Cyanide laced Kool-Aid in Guyana in a mass suicide that Umberto Lenzi turned used that cult as a basis for his second cannibal film. Even 40 years later the Jonestown incident lives in infamy and images immediately come to mind when you hear it mentioned which gives a lasting deranged quality to the Jonas character. Rassimov's hardened look instills fear and will make your blood run cold as he decapitates natives, rapes with a snake blood covered phallic icon (let's be honest, it's a giant dildo covered in snake blood) and rules with an iron fist. Ivan Rassimov proves again that he's among the finest Italian actors and one of the timeless bad guy actors of all time.

Janet Agren and Robert Kerman are also solid together with Agren portraying the desperate woman who is in over her head with the terrors presented by the jungle and Kerman as the rough and ready guide who will do whatever it takes to get paid. No review would be complete without a mention to Me Me Lai, the dark and beautiful actress who gained fame in her three cannibal film appearances and is subjected to some of the nastiest stuff EATEN ALIVE has to offer. Her babyface and doe eyes make her the perfect damsel in distress or at least the softer lover surrounded by primitive rituals and natural horrors.

Umberto Lenzi may not have enjoyed making these jungle films but he was quite good at it. Here he creates a world of cult worship that feels quite a bit bigger than it really was with just a few huts and extras that included people from the crew. He's a good director and at times masterful and I think there's touches of that here, getting realistic and believable performances out of the natives who played the cannibals and the special effects work of which there's quite a bit. There's also the touchy subject of animal cruelty in these films and there's no way around it, it happened and it's there. It's something you're either going to have to deal with or not watch the movie. I'm not a fan of editing movies to remove such content so while it isn't pleasant to watch it certainly does add to the horrific nature of the films.

EATEN ALIVE isn't the masterpiece that Cannibal Holocaust is and it doesn't have quite the same splatter and gross out factor that Lenzi's Cannibal Ferox does but it is a well put together film (better than Ferox) with a true villain who you can unabashedly hate and a group of protagonists you can cheer for. Those are two things not all cannibal films have as it was common to blur the lines of who the real monsters were in this cycle of films. EATEN ALIVE is a highly entertaining and sometimes shocking piece of exploitation horror that should enjoy a new wave of fans from this new Blu-ray release.

The Audio & Video
Severin Films gives EATEN ALIVE its high definition debut with this Blu-ray release. While the picture quality does fluctuate it is a nice transfer overall. At its best the image is warm, clean and has great detail especially in closeups and textures like hair or fabrics. At its worst the picture is a bit soft and suffers from some damage from the source material such as scratches and speckling. These imperfections can add to the charm of such a grindhouse era exploitation film depending on your viewpoint for me I can take it or leave it as long as the good outweighs the bad which it certainly does. The blood reds pop and the rest of the color palette echoes the rest of the picture quality at times the lush jungle greens are breathtaking and others they are a tad washed out in comparison. The black levels tend to be deep and free of compression issues for the most part.

The audio is delivered in three dub tracks which is standard for Italian films of this era, all presented in DTS-HD Master Audio 2.0 Mono mixes. I chose the English track which is how I've viewed the film in the past and the quality is good. The dialogue comes through crisp and clear while the memorable soundtrack that may seem untamed at times compliments it nicely and comes through with force when needed. I didn't experience any noticeable distortion or background noise to this track.

The Extras
-"Welcome To The Jungle": An interview with Umberto Lenzi - Lenzi recounts his time spent working on this film and in the cannibal genre as a whole. It clocks in at over 16 minutes and provides some insightful information along with his heavily opinionated views on the films and their legacy.
-"Me Me Lai Bites Back"- Clocking in at over 80 minutes long this feature length documentary of the queen of the Italian cannibal films examines the three films she co-starred in along with the rest of her film career and subsequent hiding from her past until her daughter put some pictures online and Calum Waddel tracks her down and brings her back into the exploitation film limelight. This documentary is insightful, funny, and a blast to watch from a fan's perspective. It's worth the price of the Blu-ray on its own.
-"The Sect Of Purification": An interview with production designer Antonello Geleng - Another substantial interview but this time we get to see an entirely different side of things as Antonello Geleng who was fresh off of working on Lucio Fulci's City Of The Living Dead goes through the process of designing the sets, locations and wardrobes. It's a welcomed change that provides a different look at the film and new anecdotes than those you'd typically here from the director.
-2013 Q & A with Umberto Lenzi From The UK Festival Of Fantastic Films - More time spent with Lenzi and there is quite a bit that differs from the sit down interview feature including some good stories involving actors he worked on different films with and stories about their dislike for each other. This is soaked in more of that signature Lenzi attitude.
-Archival interview with Ivan Rassimov and Robert Kerman - The footage may be a bit dated but the more we can pack into the release the better and it's almost mandatory that the late Ivan Rassimov be featured on the supplements so it is a great thing to have these clips.

The Bottom Line
Cannibal film fans will be doing themselves the biggest disservice if they pass up on these sleazy slice of jungle gold that looks and sounds leaps and bounds better than it ever has on home video. A bountiful selection of extras rival the main course and make for a tasty feast.

Posted by Celluloid Terror (Seth Poulin) at 12:56 AM