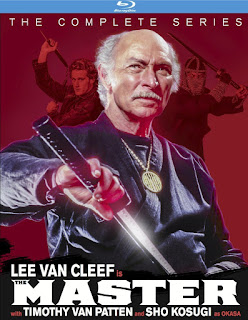 The Series
Lee Van Cleef stars as John Peter McAllister, a veteran of World War II and the Korean War who would become the first Occidental ninja, eventually deciding to leave the life of the ninja behind to search for a daughter he previously did not know he had. This was seen was a betrayal by other ninjas including his former student Okasa (Sho Kosugi) who has sworn to kill his former master for his dishonor. McAllister escapes to a small town where he meets a young, headstrong man named Max Keller (Timothy Van Patten) who constantly finds himself in scuffles and fights, commonly leaving the local bar through the front window. McAllister and Keller team up with Keller's pet hamster Henry who hangs out on the dashboard of Keller's van for a road trip adventure to find McAllister's daughter all while he takes on Keller as his new student teaching him the art of the ninja and finding someone to help and plenty of trouble at each stop along the way.

Premiering on January 20, 1984 THE MASTER should have been a perfect fit for its time. The 80s was a decade that loved odd couple buddy mashups like Knight Rider, Magnum PI, and The A-Team and ninjas were never more popular than they were during the 1980s with films like The American Ninja franchise and Enter The Ninja and Return Of The Ninja which both starred Sho Kosugi. But by August of the same year and after only 13 episodes the series was canceled and sadly most of the big plot points that drove the whole show were left unresolved. It's a shame that we didn't get one big final showdown between McAllister and Okasa and McAllister never does meet his daughter and we don't even get to say goodbye to Henry! That's okay, there's still plenty to love in THE MASTER.

Whether our ninja duo is busy fighting a dangerous and corrupt trucking company, or helping save a small town cannery, rescuing hostages or protecting an orphanage there's always a lot of spin kicks, bar fights and ninja magic. Each epsiode is a hour long (more like 48 minutes with the commercials removed) cheese fest. The best scenes of the series are those in which Sho Kosugi is around and that usually means it is a fight scene with Lee Van Cleef's stand-in that provided the best fight choreography of the series. Even these scenes have that high quality cheese funk to them as if it wasn't noticeable enough on its own that it was a stand-in doing the fight scenes for Lee Van Cleef the rubbery, wrinkled bald cap slaps you in the face. I love it. There's also plenty of scenes where you can clearly see the stand-in actor's eyes and part of his face in the opening of the ninja hood and it's obviously not Lee Van Cleef. This is all part of the charm and that charm permeates the entire series. The writing is fairly standard for a series of this nature where there's a plot that drives the series but most of the time it's individual stories with each episode and only sporadically does that main thread that holds the whole thing together come in to play. But within these standard episodes is a genuine enjoyment and love for the whole thing, especially Lee Van Cleef who is most known for his work in the Spaghetti Western genre and the writers love putting in winks and nods to this as nearly half the episodes have something in them that references his days spent in the old west. From the episode where someone says he looks like Clint Eastwood to which Lee Van Cleef replies "Not quite." or in the episode "High Rollers" which ends in an old west movie set and LVC notes how at home he feels, I fell in love with each of these moments as they popped up through the series. It's a little thing that not everyone will notice but for fans of Van Cleef's work on those pictures it is a little bit of a love letter that I appreciate.  Timothy Van Patten proves to be more than capable being the main character and doing most of the heavy lifting scene to scene. He's handsome and has a likable personality which instantly draws us to him.

THE MASTER is far from perfect and just like most television series that have passed their 30th birthday its seems are starting to show but with fun to be had in each and every episode and guest stars like Demi Moore, Clu Gulager and even Sho Kosugi's little ass kicker of a son Kane on top of the regular cast I can't help but love what THE MASTER has to offer.


The Audio & Video
Kino Lorber gives THE MASTER its worldwide Blu-ray debut via its Studio Classics line and it looks pretty damn great. The new full 1080p transfer retains the series' original 1.33:1 full frame aspect ratio as it was originally broadcast on televisions in 1984. Clarity and crispness are steady throughout with intermittent moments of light speckling or scratches where the source material was a bit rougher. The vast majority of the time the presentation is gorgeous however with excellent detail evident in the silkiness of the ninja outfits and how plainly Lee Van Cleef's stunt double stands out with his rubbery bald cap. Colors are sharp and black levels are deep and inky. I didn't notice any issues with compression or blocking.

The audio features a 2.0 DTS-HDMA  mix that isn't very dynamic but it's very pleasing to the ear with steady levels and a crisp mix. It gets the job done properly without being unnecessarily fancy. I had no problems with background noise or damage to the audio tracks.

The Extras
Sadly there's no real special features on this release, only a collection of trailers for other Kino releases on disc 3. Interviews or audio commentary on select episodes with Timothy Van Patten or Sho Kosugi would have really made this release special.

The Bottom Line
Kino has preserved THE MASTER for past and future fans with this three disc set and while it may not be high art it is high entertainment. Ninja fans take note! Recommended.

THE MASTER is available HERE
Posted by Celluloid Terror (Seth Poulin) at 3:42 PM