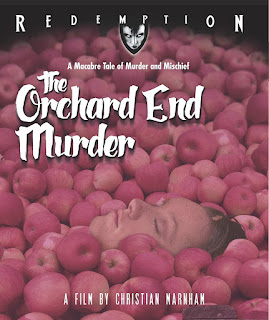 
The Film
A young woman (Tracy Hyde) visits a rural village to watch her boyfriend play cricket and make love with him in the woods between his turns at bat. When his number is called to take the field she goes off exploring the village and finds a little cottage with a gnome garden and is invited in for tea by the hunchbacked man that lives there and runs the train station for the town. While having tea she's scared by the man's brutish friend who brings a rabbit into the house and kills it by slamming it on the table before bringing it outside to skin. Soon after she agrees to take a tour of the orchard with the brutish man which leads to the man attempting to rape and eventually murdering the girl and burying her in a pile of apples. When the police begin their hunt for the missing girl the two men devise a plan to bring the body home and bury it in a place the authorities have already searched.

THE ORCHARD END MURDER has all the ingredients for a memorable and well executed exploitation film- Capable filmmaking, acting that is better than average, eye-catching sets and locations, nasty situations (in this case attempted rape and murder), and a couple of interesting characters. It's all there so why don't I love it? Well at only 49 minutes it doesn't give the movie any time to breathe which we need here. We're immediately thrown from girl being murdered to body being moved and buried. The film feels as if there's chunks missing linking scenes together fluidly so we're left with a choppy, jumpy movie. An additional half hour or forty five minutes would not only allow the film to breathe a bit and give time to those scenes that keep the film flowing smoothly but it would have allowed plenty of time to make this movie something more. What that more is could go a number of ways. It could have allowed for more killings and violence, it could have spent time building more suspense and tension around our killer and his accomplice as the suspicion grows or it could have given us the big payoff of her boyfriend getting some revenge on his lover's killer. Perhaps with a cricket bat to link the beginning and ending scenarios. That would have been great. Instead we're left with a film that's mostly all there but still feels incomplete.

It's not that what we get is bad because it isn't. I thoroughly enjoyed what I saw but the film left me unsatisfied. I didn't want more I needed it. The film needs more from substance to simple scenes linking events to keep it from being jarring. I'm puzzled by THE ORCHARD END MURDER because there's plenty I want to praise but there's just as much that I simply wish existed.

The Audio & Video
Redemption Films and Kino deliver a Blu-ray that some might say is more than a short feature intended as the B side of double feature bills deserves but I think it's just Redemption keeping up their typically high standards. The anamorphic widescreen transfer boasts strong detail and a healthy color palette. Skin tones are natural as well. There is some speckling and light imperfections as no extensive restoration work to the source material has been done but that doesn't stop the transfer from looking quite nice. The audio is presented in an uncompressed 2.0 stereo track and sounds crystal clear. The sound is crisp and pleasing with a proper mix across both channels and between the dialogue and score.

The Bottom Line
THE ORCHARD END MURDER could probably be best described as something for exploitation junkies to seek out as something new that they haven't seen before and realize how close it comes to being something much bigger and better.

THE ORCHARD END MURDER is available HERE
Posted by Celluloid Terror (Seth Poulin) at 12:12 AM