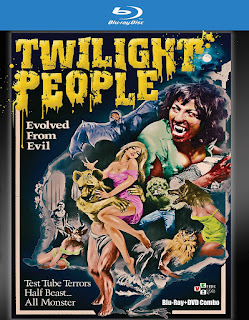 The Film
The Island Of Dr. Moreau had been adapted a number of times before Filipino film royalty Eddie Romero tried his hand in 1972 and while it may not be most polished adaptation I've ever seen it definitely leaves its mark as a worthwhile entry into the lure of Dr. Moreau.

John Ashley stars as Matt Farrell, a man who is kidnapped by Neva while diving and taken to the island compound of her father Dr. Gordon who is experimenting in creating a master race by combining human and animal genetics. Neva has problems with some of her father's methods and after a failed experiment she begins to fall in love with Matt and frees him and the other animal people which leads to Dr. Gordon and his security to hunting them through the island forest.

THE TWILIGHT PEOPLE is pretty evenly broken up in to two halves, the laboratory and the jungle hunt. The first half offers a bit of science fiction and mad scientist type fun but the second half of the film is really where the movie picks up the pace and becomes a minor cult classic. The animal people get more of the spotlight in the second half as they're lead through the wilderness by Neva and have to fight for survival while being hunted and also fight their own animal instincts to not hurt each other or Matt and Neva. The first half of the movie is slow and really could use a bit more action. It's very talky and boring in stretches. I think the movie could have been a true cult classic had the movie been more evenly distributed and not so loaded in the back end.

The film is solid even with sluggish pacing which is no surprise with Eddie Romero directing as even when the movies were cheap (and they usually were) he made entertaining genre films. The special effects makeup are one of the highlights of film seeing all of the various human-animal hybrids and getting to see Pam Grier as the Panther Woman was a nice treat. THE TWILIGHT PEOPLE is flawed but fun, and at only 81 minutes once you really settle in you're just about to the best parts anyways so sit back and enjoy the Moreau madness.

The Audio & Video
VCI delivers THE TWILIGHT PEOPLE to Blu-ray with a new 2K restoration that has its ups and downs. Detail can be quite good with excellent clarity and definition in skin lines, hair and other textures. Coloring has a wide range from naturally lush and vivid to a bit washed out and at times having a strong yellow hue over the picture. More often than not the color is decent though. There are some scratches and speckling and various imperfections that keep the film from looking amazing but for a film such as THE TWILIGHT PEOPLE I think the good outweighs the bad and the imperfections didn't hamper my enjoyment of watching the movie. The audio on the disc is presented in a mono PCM track that sounds good for a simple mix. The audio never becomes distorted or unpleasant to listen to while the levels are mixed well between the music and dialogue.

The Extras
The big extra is an interview with Eddie Romero that runs nearly an hour long. This is a priceless clip for exploitation fans filled with all sorts of great stories and recollections from the king of Filipino exploitation. This addition to the disc makes it a must own for anyone that is interested in filmmaking history.

Also included is an audio commentary track with film historian David Del Valle and filmmaker David DeCouteau along with TV spots and a theatrical trailer.

The Bottom Line
TWILIGHT PEOPLE is an entertaining jungle romp that stands tall in a sea of adaptations of The Island Of Dr. Moreau.