The Film
The 3rd entry into the Nikkatus Collection (yes, they're still numbering the spines for collectors) has arrived and it is a perfect fit. EROS SCHOOL: FEELS SO GOOD is a mix of sexploitation and offbeat comedy that somehow meshes together and flows smoothly. Ryu is a new student at the school after being expelled from numerous reform schools for raping his classmates. He arrives arrogantly with his pet pig and shows no remorse for his actions. He brags about his perfect ratio of beauty queen rapes and even refers to himself as Ryu the Rapist. He sets his sight on class president and track star Misa who prides herself on not only her school accomplishments but her virginity as well. As Ryu plows through Misa's friends he begins to stalk Misa with signs around the school and showing up at the big track meet. The only person that can possibly stop Ryu is Tadao, a nerdy student who obsesses over Misa, but he might have the wrong intentions as well. 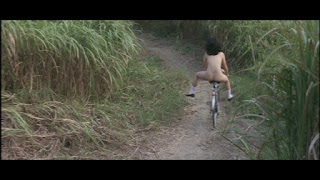 There is little else in the way of a plot but there is plenty in the way of entertainment. While the sexploitation and comedy are certainly interwoven make no mistake, the emphasis is on the nastier bits. There is nudity and sex galore and it can sometimes come out of nowhere. The school staff does essentially nothing to stop it and aren't even seen in the movie but for a brief couple of minutes total. The pace is changed up with the comedy pretty well and it is never forced. Even with much of the movie focusing on rape it never quite comes across as dirty as you may think except for a scene toward the end which tries to lighten itself up with a bit of the oddball comedy but it really doesn't and it's just pure exploitation. 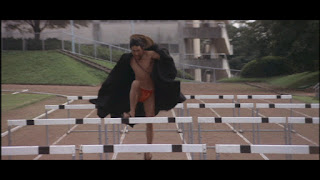 The Video
The new DVD of EROS SCHOOL comes to us from the Impulse Pictures line of Synapse Films with a 16x9 2.35:1 widescreen transfer and looks good. There are some outdoor scenes which are a bit on the grey side but that has more to do with the filming conditions than it does the transfer on this disc. The all important flesh tones are represented naturally and the few scenes with real artistic drive behind them are directed well enough with lighting in mind that colors can shine. Aside from a few soft spots the transfer is a success. 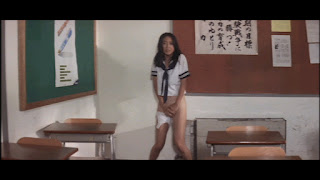 The Audio
A single Japanese 2.0 mono track is available with removable English subtitles. The audio is free of any hissing or crackling. The subtitles are easy to read and timed well with the corresponding audio. A perfectly serviceable track.

The Extras
As was the case with the first two discs in this line the only extras are liner notes from Pink Film expert Jasper Sharp. Sharp provides more history on the cycle of these films and EROS SCHOOL itself. It would be nice to have a trailer or interviews but these liner notes provide quite a bit of information in a small package. The notes also include original Japanese artwork for the film. 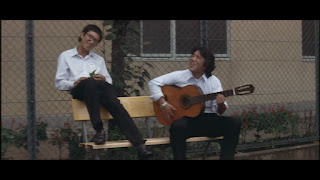 The Bottom Line
This 3rd entry into the series from Impulse Pictures has been another winning romp into the world of sex and violence, this time revolving around school girls. This is 67 minutes of "close-the-door, shut-the-shades" entertainment.