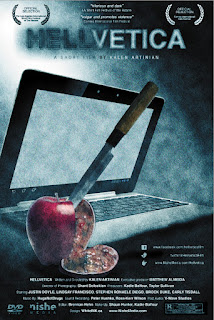 HELLVETICA is a short film from the mind of writer/director Kalen Artinian. The story surrounds a struggling writer named Simon who is constantly nagged by his girlfriend to get a "real job" since his writing isn't cutting it. When the phone rings with an offer for a writing gig all seems to be going well. The problem is the gig is for a horror story and Simon doesn't know horror. As Simon tries to come up with ideas, he's seemingly plagued with the company of a self-absorbed, douchebag hipster who is always around him and obnoxious. Simon soon realizes that you have to write what you know and the only way to write horror is to know it and snaps on the hipster to get his story.

The story is a simple but done effectively. The film is directed and photographed with skill and the film has a nice look to it. The actors all deliver solid performances, though I could have done without the hokey Dexter ripoff character or the silliness of the voice on the phone. The hipster was about as unlikeable as humanly possible and it was a pleasure to see him get what he had coming. Overall this is a pretty good short film that certainly shows bigger things are possible in the future of the film makers.
Posted by Celluloid Terror (Seth Poulin) at 10:20 PM