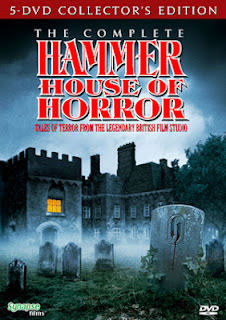 The Film
By 1980 the famed horror studio Hammer had ceased theatrical productions and started an anthology TV series known as HAMMER HOUSE OF HORROR. The series ran for 13 one hour episodes that were cut for airing in the US, with the final episode never even making it to American screens. 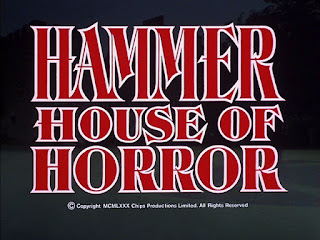 "Witching Time" is the first episode of the series. Directed by Don Leaver and originally airing on September 13, 1980, this episode starts out with a sequence that could be taken from any slasher the decade would come to be known for however this is not how the episode would play out. Take a little bith of witchcraft and add in some time travel, nudity and possession and you have a worthy start to this series. Look for Italian genre film favorite Ian McCulloch  to guest star as the doctor. A week later came "The Thirteenth Reunion" helmed by long time Hammer collaborator Peter Sasdy. Look for a familiar British face in Warren Clarke who played one of Alex De Large's droogs in Kubricks A Clockwork Orange. The horrors that high society partake in and get away with are on full display here. Rounding out the first disc in the set is another episode from Peter Sasdy that stars Denholm Elliott, a face fans of Indiana Jones will undoubtedly recognize. In this episode Elliott plays a real estate agent who dreams of murder over and over (and over) until his mind begins to crack under the pressure and dreams become a reality. 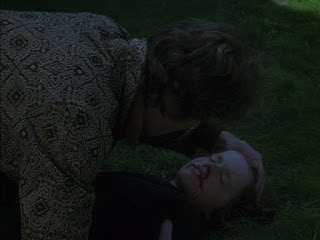 Disc 2 gets underway with "Growing Pains" which feels a lot like The Omen through much of the episode. The atmosphere is creepy surrounding the main character, a young boy who was recently adopted. The ending doesn't quite live up to the build. I still found it to be a worthy entry. Have you ever heard how a house can harbor negative emotions or that an inanimate object can be evil? That is the case in "The House That Bled To Death", which has some of my favorite visuals of the entire series and may be the most unforgiving in it's nature. Director Robert Young made his Hammer debut with the underrated Vampire Circus. Here he directs "Charlie Boy", the story of a man and his wife who have inherited the art collection from their dead uncle. Included in which is an African statue similar to a voodoo doll that begins to claim the lives of those surrounding it. This may be among the most brutal of all the episodes. "The Silent Scream" starts out disc number 3 and was directed by Alan Gibson the man responsible for Hammer titles such as Dracula A.D. 1972 (which I love) and The Satanic Rites Of Dracula. While he got to direct Christopher Lee in those two films he gets to direct the other top name for Hammer, Peter Cushing. This episode is very well made, has great performances and excellent tension. There is good reason that this is probably the most well liked episode of the series. The only film in the series to use a traditional horror monster is "Children Of The Full  Moon". This episode is pretty good with it's use of old Hungarian folk lore and a spooky countryside atmosphere. A little more action would have been nice though. Wrapping up the disc is "Carpathian Eagle" a play on the story of Jack The Ripper that has a few twists on and in the story. I found it to be a bit slow and not totally engaging but the payoff is worth it. 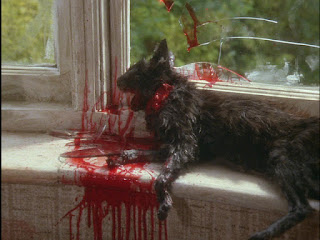 The final 4 episodes are split across discs 4 and 5 starting with episode number 10 of the series, "Guardian Of The Abyss". This episode features Satanic cults, black masses, creepy evil antiques... all things I'm a fan of. There is some cool imagery as well that adds even more flare from the devil. All in all an enjoyable episode."Visitor From The Grave" is a bit more psychologically driven and is a decent thriller. Featuring murder, setups, and bodies that won't stay buried this episode spends it's runtime watching the main character descend into madness (again).What starts as an innocent vacation turns into a surreal nightmare where everything that can go wrong, does in "The Two Faces Of Evil". This is an interesting episode from returning director Alan Gibson that twists and turns down a road to doppleganger hell.'The Mark Of Satan" is "the episode that went too far!". The 13th and final episode of the series was never aired for syndication in the US including cable and a run with Elvira home videos and only aired one time during the original run in it's native England. Numerology, Demonology, conspiracies, paranoia, cannibalism and self-mutilation are all on display here in various levels. Is it evil at play or a crazy man's psyche tearing him apart? That is the ultimate question. 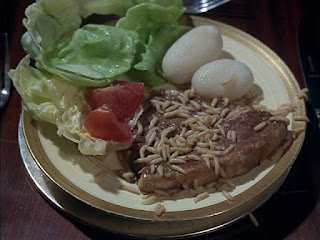 The Video
Synapse Films brings us the complete series of HAMMER HOUSE OF HORROR in a nice looking 1.33:1 full frame transfer preserving it's original aspect ratio from it's television broadcast. It isn't clear if any restoration work has been done to the film elements but they look well maintained and very clean. Colors and dark levels are strong and flesh tones look natural. There are only a couple of instances where the image gets soft and these instances only last for a few seconds each. Other than that there is nothing to complain about here. 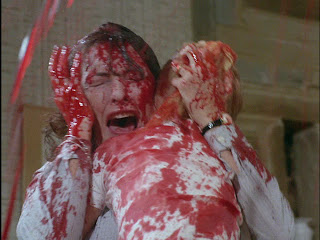 The Audio
A 2.0 Mono track is the single audio option but it does the job just fine. The level mixing is done with skill as dialogue never has to compete with each episode's soundtrack. Levels are stable across all 5 discs and all in all the audio on this set is handled very well.

The Extras
Episode Introductions With Film Historian Shane M. Dallman- Each episode receives an intro from Mr. Dallman that provides a brief insight into the making and history of that episode. Everything from key names in the cast to the censorship the episode received during original syndication is covered. These are optional for the episodes but are great to watch at least the first time you make your way through the set.

Grave Recollections: A Visit With Kathryn Leigh Scott- This interview spends several minutes with the lead actress from the "Visitor From The Grave" episode as she fondly remembers her time spent with Hammer and in the horror genre.

Hammer Housekeeping: A Visit With Mia Nadasi- Another interview with an actress from "Visitor From The Grave" who is also married to director Peter Sasdy. She discusses working with her husband and on the series. 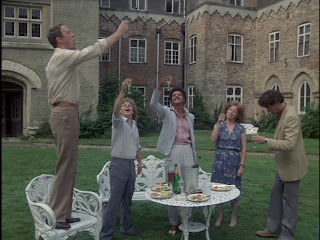 The Bottom Line
Synapse Films has put together an attractive 5 disc set in a standard width single Amaray case that presents HAMMER HOUSE OF HORROR uncensored with all of the nudity and violence intact. Any fan of Hammer productions, horror anthology series or horror as a whole will enjoy this set. There is enough variation in each episode that there is something for everyone. The extra features are a nice addition even if they leave us wanting more in the way of supplemental material. I have no problem highly recommending this set to everyone.

Very interesting blog. Alot of blogs I see these days don't really provide anything that I'm interested in, but I'm most definately interested in this one. Just thought that I would post and let you know.
http://clearviewsurfaces.com