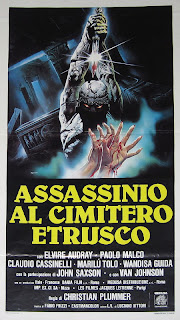 Sergio Martino is a director who has made dozens of wild and entertaining films across many genres including horror, western, sci-fi and crime. While many of his films could fit in Euro-trash or Euro-sleaze category it hasn't stopped the man from being a damn fine director. There may be no better example of this than the third act of his excellent giallo TORSO. SCORPION WITH TWO TAILS is something else entirely. 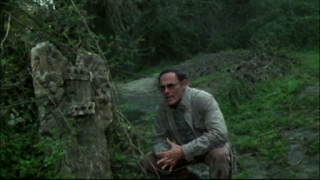 Arthur Barnard (John Saxon, ENTER THE DRAGON, TENEBRE) is an archaeologist working on a dig at an ancient Etruscan tomb while his wife Joan (Elvire Audray) is suffering from nightmares of the tomb and sacrificial rites of the Etruscan's while at home in New York. Joan foresees her husband's death, having his head twisted around backwards, just as the Etruscans did to their victims. The local police theory of thieves doesn't sit well with Joan so she travels to Italy to investigate the murder of her husband, bringing along Mike, Arthur's partner who stayed behind in New York on the dig. Joan finds confusing notes in Arthur's journal that she uses to uncover her father's role in an international drug ring that may have played a role in Arthur's death. As the investigation continues more and more people end up dead with their head twisted just as Joan had seen in her nightmarish visions.

When Joan finally gets inside of the tombs she realizes that those dreams had actually shown her the inside of the tomb. She begins to become more in tune with the Etruscan rituals and weird things start happening with characters coming in and out of suspect for the murders that continue to mount. The ancient rituals come to a climax just as intentions are revealed for one last murder. 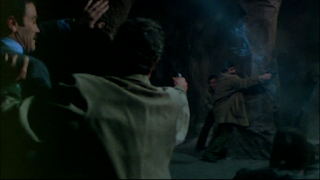 Where to begin with this one... SCORPION WITH TWO TAILS is a messy, messy film. What starts out as an Italian horror flick, steeped in creepy atmosphere and locations turns into a murder mystery crime ordeal and then becomes some sort of muddy mix of the two. The best way to look at it would be one of Fulci's lesser horror flicks from the 80s meets a giallo without being able to really meld them together. There is a bit of a water meets oil situation going on in this film. Sergio Martino's direction isn't bad but it is far from his best, it is full of many cliches from both types of film present here. The red herrings of the giallo and the maggot infested nightmares of Italian horror both show up more than once. The cast is rather wooden through the entire thing but get the job done without really pushing themselves too much, including a role from Hollywood vet Van Johnson. Fabio Frizzi delivers the original music that suits the film fine but probably won't be remembered as his finest work. 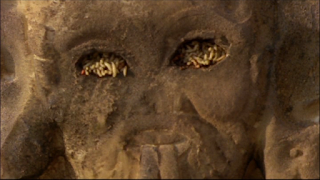 SCORPION WITH TWO TAILS, aka MURDER IN AN ETRUSCAN CEMETERY, was originally meant to be a TV miniseries which is probably the main culprit behind the lack of sex and violence. Martino was never shy about either of those two components and with very little nudity to speak of and the violence mainly muddled by fog and other techniques and bloodless it makes sense that the television censors were on his mind. This is a strange film to review in that everything I've written has sounded rather negative but I assure you I did enjoy the flick despite its issues. While it is a shame that side plots rule so much of this movie because this could have been another great collaboration between Martino and writer Ernesto Gastaldi. As it stands it is probably more of a weird novelty that you should enter with tempered expectations and you might come out of it enjoying it as I did for being a completely bipolar, schizophrenic supernatural horror crime mashup.