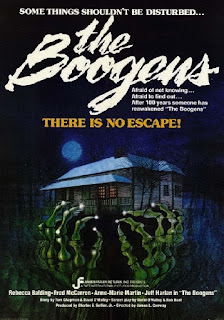 THE BOOGENS is a horror film I've known about for many years having never seen it until this viewing. It was never one of the more notorious titles that a young horror fan would hear about but it had a consistent following, even into the last couple of years when I would read message board threads asking "which horror film are you waiting for on DVD" and THE BOOGENS would always get brought up at least once. Well with a recent DVD and Blu-ray release, this underrated 80s gem can finally gain a wider audience.

Mark and Roger are two guys fresh out of college who take a job in the Rocky Mountain mining town of Silver City where they work with their two bosses to re-open a mine that was closed in 1912 after a collapse and apparent attack. Roger (Jeff Harlan) has his girlfriend Jessica (Anne-Marie Martin) and her friend Trish (Rebecca Balding) move to the area with them with the intention that Mark (Fred McCarren) and Trish might hit it off. The guys arrive a day earlier to begin their work in blasting open the mine. When the girls arrive in town that evening Jessica and Roger go straight to the sex they've both been obsessing about while Mark and Trish quietly and shyly introduce themselves over beers while being annoyed by Jessica's bastard dog. Shortly after a sheriff arrives asking if the group has seen the landlord, a young woman who disappeared the night before.

When the group goes into town for dinner and shoot pool Roger leaves early to get some sleep for a midnight run to Denver to pick up materials for their job and is suddenly attacked in the house. Over the next day, while the remaining crew is working in the mine, and Trish is busy working on a journalism story about the mine, Jessica is attacked by the unknown assailant which would only be the beginning of the trouble for everyone involved with the mine crew. Piles of bones are found within the mine, vandals try to board up the entrance and warn the crew of the dangers, and secret passageways are found leading from the mine to houses, all the while something is attacking people.

THE BOOGENS, directed by James L. Conway, who has since had a successful career in TV, plays out very similar to a typical 80s slasher, without a knife or axe wielding maniac behind the deaths. It is interesting that Charles E. Sellier Jr. who directed the infamous Christmas slasher Silent Night Deadly Night, was a producer on this film. Many of the stereotypical slasher film characters and stereotypes are present, including the sex-crazed couple, the shy and quiet yet attractive blind dates, and the crazy old man local who knows all about what is happening. The difference here is that every single character is extremely likable. We don't have a snotty douchebag teenager that we are cheering for as they get ripped apart limb from limb. Instead we have a group of young adults who act like decent human beings that we can all relate with and hope they survive, with the exception of that fucking dog. This is an important part of the film that relies more on building some tension and suspense rather than in your face violence and gore. The actual horror of the film doesn't really start until well after the 50 minute mark and there isn't much gore to speak of outside of some blood and bones. When we finally see the creatures, long after they're introduced, we're presented with a blend of spiders, a Lovecraftian tentacle monster and the creatures from The Deadly Spawn.

This is a film that has been in the back of my mind for quite some time, and the ability to finally see it, in high-def no less, was a thrill. The positive review Stephen King gave it back when it was originally released certainly helped its cult status but even today it should please most horror fans that are checking it out for the first time.