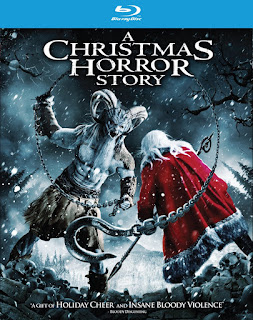 The Film
Christmas isn't all reindeer, presents and yuletide cheer. There's a darker side to the 25th of December including The Krampus, occult versions of the Nativity, killer zombie elves and a simple disdain for the holiday. This isn't a wonderful life, this is A CHRISTMAS HORROR STORY.

Anthology films and horror have gone hand in hand since well, the first anthology horror film but this may be the first Christmas horror anthology film, at least that I can remember. A CHRISTMAS HORROR STORY features four stories of holiday fear. Unfortunately all four stories play congruently as opposed to the standard format of one story playing to its conclusion and moving on to the next. This breaks up the individual segments for no apparent reason which makes the movie feel as there's simply too much going on at any given time.

The segments themselves aren't bad, it is just the way in which the entire film is presented that drags it down. Each segment is decent but sadly most of them miss out on the gorgeous and sometimes wonderfully gaudy Christmas aesthetic. The tacky decorations can lend a beautifully colorful look and feel to a set but there's little of that to be seen. What we do see is a simple but effectively vicious looking Krampus, some killer zombie elves that look like they came from Satan's version of Lucky Charms and a grizzly and badass Santa Claus. Oh and a pretty hot sex scene with a possessed girl humping her friend's brains out. Nothing says Christmas like a little fully clothed sex, right?

A CHRISTMAS HORROR STORY is a nice mix of horror tropes that has good special effects and make up and good costuming. It also has a solid comic relief segment that pops up every so often with William Shatner playing Dangerous Dan, the local radio station host who tries to spread Christmas cheer while getting hammered on egg nog. While I don't think A CHRISTMAS HORROR STORY would be any sort of classic had it been presented in a traditional anthology format, I think it would have been a bit more successful in its execution but either way it is an entertaining holiday horror movie.

The Audio & Video
Image/RLJ Entertainment's Blu-ray of A CHRISTMAS HORROR STORY is gorgeous. Colors are bright and vibrant while whites are beautiful without being "hot" and black levels are deep and inky with no signs of blocking. Detail level is strong in surfaces and textures and skin tones are fleshy and natural. The PQ is excellent and the audio is no different with a DST-HD 5.1 master audio mix. The mix is strong with dialogue and soundtrack levels being properly complimentary. There's no damage or distractions to the crystal clear audio. This is how a modern movie should look and sound on Blu-ray.

The Extras
The lone extra is a 15 minute behind the scenes featurette.

The Bottom Line
Christmas horror films are a bit of a hot property at the moment and A CHRISTMAS HORROR STORY will be able to stand up tall and proud among them even if it doesn't use the holiday setting to the extent I was hoping for.