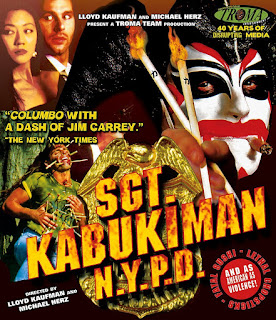 The Film
Harry Griswold is a sergeant with the NYPD, he's a hot dog loving Bronx boy who is about to learn his destiny - harnessing thousands year old powers that will transform him into a superhuman Kabukiman sent to protect New York and the world from ultimate evil with his arsenal of weapons and powers including deadly chopsticks, sushi and Geisha fans.

First a bit of background - While filming The Toxic Avenger 2 in Japan Troma presidents Lloyd Kaufman and Michael Herz were approached by Japanese financiers connected to Namco to create a Japanese superhero since the first Toxic Avenger film was a big hit in Japan. Namco became a producer and SGT. KABUKIMAN NYPD was greenlit with a 1.5 million dollar budget, the biggest budget Troma had ever worked with.

Ideas differed for the film as Michael Herz and the Namco boys wanted a more family friendly, mainstream oriented film while Lloyd Kaufman wanted to go the traditional Troma route filled with offensive material, dark comedy and sex and violence. Kaufman won the battle (mostly) and SGT. KABUKIMAN NYPD would end up being R-rated and the Namco boys pulled their distribution leaving the future of the film up in the air until it was finally released theatrically in 1996 despite being screened at Cannes upon its initial completion.

I find SGT. KABUKIMAN to be one of Troma's most iconic characters that could stand toe to toe with Toxie had it been granted sequels in the way The Toxic Avenger was. Now, there's really no denying Toxie is the Troma icon, but Kabukiman is no slouch and neither is the film. Sure the film starts out with a confusing set of astrological circumstances to turn our everyday cop into the striped-bathrobe wearing superhero but that's part of the charm. Planets are in houses, Jupiter has a hole that tigers are jumping through and some other bullshit immediately tell the viewer they're in for classic Troma fare. The movie is gory complete with its own head crushing scene, and its sleazy with a daytime public rape attempt. It's silly and stupid with some cultural stereotypes and cliches on full display. We even have Brick Bronsky! BRICK BRONSKY! I dare not say his name a third time.

The movie is a bit uneven at times because there still seems to be a bit of hokey family friendly attempts thrown in which on a first time viewing may pull the viewer out of the film briefly but I think it adds to the charm once you get to know the film. And you can't dislike the original use of the trademark Troma car crash, can you? No, I think not.

SGT. KABUKIMAN NYPD was the first step in Troma attempting to break into the mainstream, something they'd have an unexpected bit of success with a few short years later with The Toxic Crusaders cartoon and brand. While Troma found the crack that allowed a Troma product to squeeze through on to TV sets, video game systems (despite the games being damn near unplayable) and toy chests in homes across America perhaps the timing just wasn't right in 1990 for SGT. KABUKIMAN NYPD to be the movie that made "Troma" be a weird word that parents in their 50s and 60s now somehow remember, but they aren't sure where from. Who knows what the world would be like if Micahel Herz and the Namco financiers had won the battle over the film and made Kabukiman an international superhero and icon.

The Audio &a Video
Troma gives SGT. KABUKIMAN NYPD a beautiful full 1080p HD presentation. The 16x9 anamorphic widescreen transfer has a healthy and natural grain structure giving the movie an actual film look. Colors are sharp and vibrant while black levels are deep and come across with no signs of compression issues or blocking. Skin tones aren't at all waxy and detail level is strong in textures and surfaces. The English audio mix is well done as the dialogue comes across loud and clear and the soundtrack is complimentary without ever drowning it out. I didn't notice any damage to the audio but there is a constant whirring in the background similar to that of a running projector that is a bit distracting and annoying at first until you tune it out.

The Bottom Line
Kabukiman is one of Troma's most iconic characters and it's great to see him shine in HD with an awesome release like he deserves to.