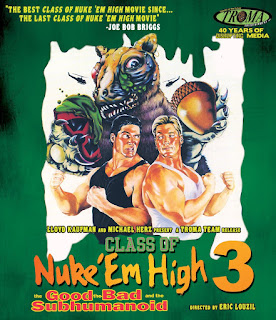 The Film
The mayor of Tromaville gives birth to identical twin boys, Adlai and Dick but Dick is kidnapped from the hospital and raised by evil conglomerates hellbent on turning Tromaville into a toxic wasteland by committing a crime and framing Adlai.

CLASS OF NUKE 'EM HIGH 3: THE GOOD, THE BAD, AND THE SUBHUMANOID is more mutant meltdown madness. Filled with plenty of hilariously stupid jokes, more Brick Bronsky than you know what to do with and all of the raunchy stuff that makes us love Troma, this was a great end to the trilogy until the series was revived a few years back.

The plot is very loosely based on Shakespeare's The Comedy Of Errors at least as far as the separated twins and mistaken identity plot device goes. More realistically it gives Bronsky a triple threat of roles to show off his incredible (or not so) acting abilities but he's a lovable cornball in this and is certainly the star of the show.

If you're reading this you're probably familiar enough with the trilogy to know what you're in for - gross out gore, people melting, a giant mutant squirrel, lots of boobs, high energy, offensive humor and Brick fuckin' Bronsky. What else is there to say?

The Audio & Video
Troma has done a nice job bringing the NUKE 'EM HIGH films to Blu-ray so far and this is no exception. The 1080p full HD anamorphic widescreen transfer has strong details in surfaces and textures along with a natural but vivid and vibrant color reproduction. Skin tones are fleshy and not at all waxy. There's a thin layer of digital noise over the picture that takes away from the detail at times but it's nothing major. The HD 2.0 audio mix is clear and well mixed. There's no damage to the soundtrack but there is a bit of background noise throughout the film that sounds like the whirring of a projector. It's never distracting and after a while you tune it out but it is noticeable to begin with. Overall I'm quite pleased with this Blu-ray presentation of THE CLASS OF NUKE 'EM HIGH 3.

The Bottom Line
The NUKE 'EM HIGH movies are some of Troma's best work and this Blu-ray is at the head of Troma's class.